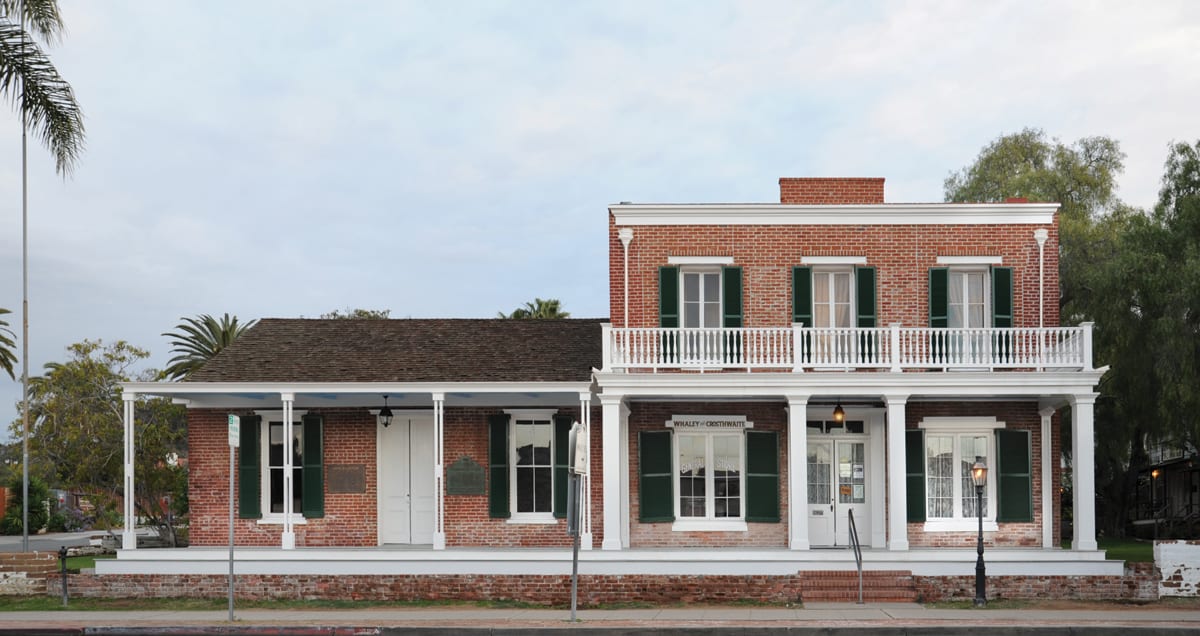 I’m excited to write about The Whaley House, or better known as America’s most haunted house.

I have an affinity for horror films and Stephen King, so when it comes to traveling to haunted places around the world, I’m usually the first (or only) person to say yes. My husband flat refuses to be a part of these adventures.

Even if you aren’t a native to San Diego, you’re probably familiar with The Whaley House ghost stories or at least The Whaley House movie (which tanked btw). Please refer to my guides below on how to go about booking a tour and if you wish to read my own paranormal story afterward, scroll on. There are several excellent Whaley House tours offered.

There are several different kinds of tours you can take. First, you can choose to take a tour hosted by the house itself, or you can take a third party tour. I did both.

Whaley House tours are offered via Daytime Tours and Nighttime Whaley House Tours, AND Ghost Hunting Tours! AND if you’re feeling extra adventurous, you can book a Private After-Hours Tour for $75 per person per hour.

I only did the daytime tour, but personally, I REALLY wish I did the Ghost Hunting Tour or the private tour. This sounds like a blast, but of course, it wasn’t for everyone in my party.

The ticket prices are reasonable and you can purchase tickets at the Museum Shop next door. For private tours, you can actually purchase them online.

I opted to take this tour through Old Town’s Most Haunted.  The man leading the tour has been an avid ghost hunter for a number of years and we thought this was interesting. However, the Ghost Hunting Tour offered by the Whaley House itself may not be all that different except for the fact that San Diego Ghost Tours leads you around other parts of Old Town that are haunted and NOT just the Whaley House. The price is $39 a person for 11 PM, or $19 a person if you choose to go at 9 PM. Please see the website below for more information. Also, the story I wrote on this post was based on this tour I took.

TIP: Whatever tour you decide upon, don’t forget to download your own EMF detector APP on your iPhone for more fun.

Now onto my own story…..

My Experience at America’s Most Haunted House

Before I moved to Japan, I lived in San Diego for a couple of years. It was amazing. San Diego truly is America’s Finest City. And with that, it’s also known as one of America’s most haunted cities. And it was here that I had one of my most interesting travel adventures yet.

I’m a nerd when it comes to paranormal stuff. There, I said it. I’m not a total believer but I also keep an open mind about things, and my mind tends to wander towards the curious.

On my iPhone, you’ll find a folder called “Utilities” and inside said folder you’ll find my collection of paranormal apps that I use every now and then. If you’re not a nerd, then an EMF detector just looks for electromagnetic frequency.

However, it’s a common device used to measure spikes in EMF readings which paranormal researchers argue could indicate “activity.” I can’t really vouch for the reliability of the iPhone detector, but it nevertheless satisfies my curiosity or boredom on occasions when I’m traveling somewhere interesting.

Why am I telling you this? Well, because now you know that I’m officially a weirdo nerd, but EMF detecting actually relates to my own story about the notorious Whaley House.

The Whaley House is located in Historic Old Town San Diego, and if you’re not aware of its prestige in the paranormal community, the Travel Channel and LIFE magazine labeled it as the most haunted house in America.

You can even count on the United States Commerce Department to declare this house “officially haunted,” according to an article in Time magazine. But labels aside, it has a reputation second to none in California and in the US for producing strong paranormal activity. And so naturally, this piqued my interest.

Without going into too much detail about the history of the Whaley House itself, you should know that it was built in 1857 and throughout that time, some awful stuff has happened on the property. The Whaley House story is rather tragic, but you can read up on it here at The Whaley House Story.

Around 2010, my cousin Tess came to visit me in San Diego. She’s pretty much the only person who ever shared my enthusiasm for exploring places like the Whaley House and when it comes to odd travel adventures, she’s my favorite partner in crime. So one night we booked a ghost tour with Old Town’s Most Haunted.

We arrived around 11 PM to join a small group of ten or so other people. The tour guide was an interesting fellow who has been giving tours for over 14 years. But more than a tour guide, he was, in fact, a real-life ghost-hunter! I’d never actually met one of these before. But the tour lasted over an hour and unsurprisingly, we didn’t experience a thing. The guide did, however, have a couple of EMF tools and even taught everyone how to use them, which made it a more interesting night. But I was a bit disappointed having experienced nothing.

But then at the end of the tour, he took the group over to the front of the Whaley House lawn. At this point, he started describing this so-called “vortex” located on the front lawn which he proclaimed was a portal to another dimension where ethereal beings come and go. I kid you not, this was his legitimate assertion.

I rolled my eyes and considered the tour officially over. It took a couple of minutes, but eventually, he located the “vortex” at about 4 feet off the ground with the EMF detector. Per the ghost-hunter, the vortex moves around the yard a lot. When the detector lit up, he then signaled for us to come over and feel it.

I was one of the last people to go to over there. He said some people can feel it, but that he’s never actually been able to feel it himself before. That’s strange, I thought. But he explained that when you touch it, your hands will start to tingle and feel a warmth, and then you may actually be able to feel a pressure. I walked over to the spot and to my shock, immediately my hands began to tingle with pins and needles and I felt a warmth spread over them, not unlike a hot flash.

Tess’s hands tingled too as we stood over the vortex and looked at each other with wide eyes and childish fascination. But most interesting of all, I felt a very real energy pressing against my hands. It felt like the equivalent of someone else’s hands pressed against mine pushing back equally as firm.

I continued pressing my hands towards the ground but no matter how hard I pressed down, the resistance in the thin air forced them back. So there I was, standing in the middle of the Whaley House lawn after mid-night, touching this invisible force of energy. And yes, this sounds insane.

My cousin Tess wasn’t able to feel the energy quite as much which left me more curious as to why some people can feel it while others can’t. It sounds like it may have something to do with different sensitivities to EMFs, but I don’t know.

So there you have it. I obviously don’t believe there is a portal to another dimension just hovering around the Whaley House lawn. Though I wish that were the case. But there’s certainly an energy vortex there, probably similar to the ones in Sedona, Arizona, or something you feel from practicing tai-chi. Btw, a trip to Sedona is on the top of my list for when I move back to the States!! But I find it curious that a high amount of paranormal activity reported on the property is correlated with the presence of this strong field of energy.

The next time you’re in San Diego, you should totally check this place out and see for yourself – if you’re interested in this kind of thing. But to be honest, my experience with the energy field at the end of the tour is the only thing that was most memorable.

It was unexpected and borderline paranormal. But other than that, the rest of the tour was interesting but you can’t expect anything more.

If you’re seriously bent on seeing a ghost (assuming you believe they exist), according to the tour guide himself, your best bet is to just hang out at the Whaley House for several hours in the middle of the night. And if you do this often enough, you’ll see something.

Naturally, Tess and I went back the next night I think around 1:00 AM, and attempted to do just that. The street was dark and eerily quiet and our anxieties were high. As we pulled up to the Whaley House, it looked much darker than the night before and creepier. Then all the bizarre stories we were told flooded back and filled our minds with senseless anxiety. As I turned off the car, my atheistic cousin refused to get out and she demanded we leave immediately. I tortured her a bit longer and sat in the car, pretending to see things. But eventually, we both screamed like little girls and ran away. It was a brilliant night.

Have you ever been to The Whaley House? Did you have a paranormal experience too? If not, perhaps you should book one of these Whaley House tours!