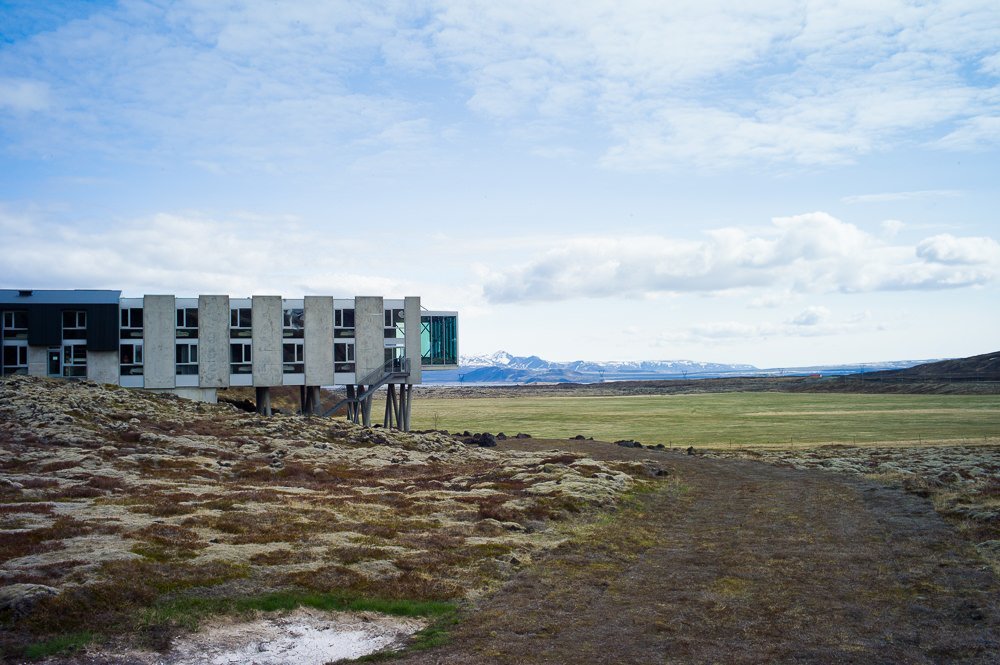 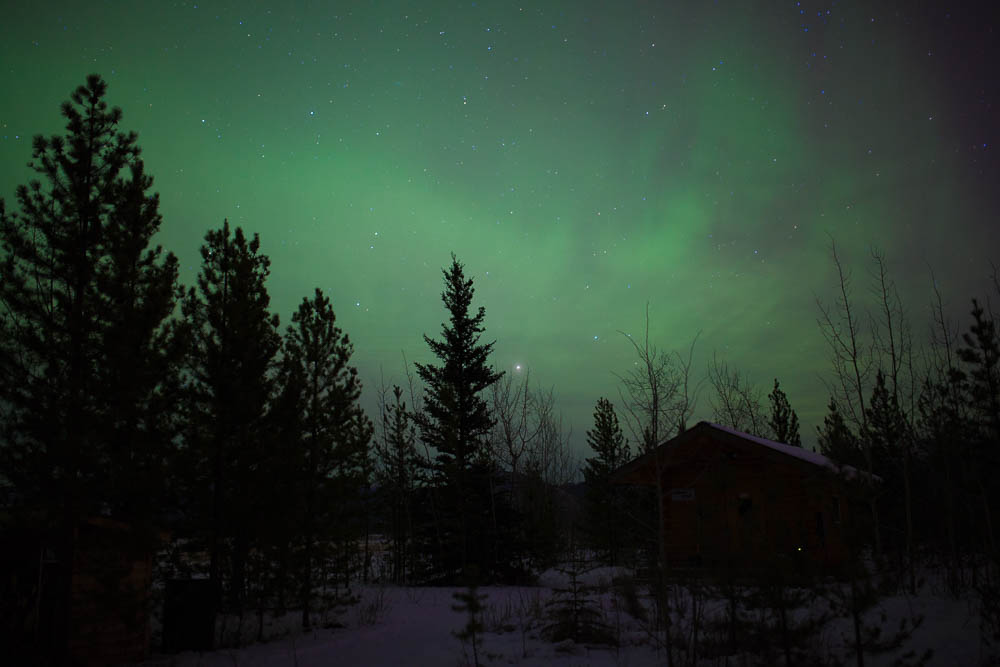 Seeing the aura lights or the northern lights is one of the most magnificent travel experiences. But it’s highly unpredictable and for that reason, I recommend planning a trip not solely around catching these lights which may or may not appear.

And for this reason, I believe that Iceland is an excellent place to watch the aura lights.  Below is a brief story about my experience watching the Northern Lights in the Yukon, followed by my recommendations for Iceland. It should be clear why I believe Iceland is the smarter of the two options.

My Experience Seeing the Northern Lights in Whitehorse Yukon, Canada

This time last year, I was making plans to see the Northern Lights in Whitehorse, Canada. My college friend and I booked a cabin in the Yukon wilderness.

We were isolated in the snowy wilderness with only about 5 hours of daylight. I wanted to film a horror movie in our spare time, but my friend wasn’t quite as enthusiastic. I have some footage though of random scenes I staged.

Every night for about five days, we trekked with our tripods and cameras through the Yukon wilderness in -20 degrees Fahrenheit for about twenty minutes in the pitch dark, illuminating the path with our ultra-high beam flashlights.

Before the trip, I purchased a tactical flashlight with stun capabilities which is particularly useful if you encounter grizzly bears.

We made this trek every night for five nights. We threw on multiple layers, laced up our boots, zipped up our parkas, threw on our face masks, and headed out with our cameras.

The first night was the clearest, but still not that clear. We planned our trip at a time when the moon was not full, but the lights were weak. Every night for the next four nights, we completed the same routine and headed out into the wilderness to a viewing station.

We would sit there in a tiny dimly lit up cabin, sipping watered-down hot cocoa. I generally refuse to drink hot chocolate made with water, but times were tough. But every night we stood out there in the open wilderness and waited for these lights to appear, but we got nothing.

We traveled all the way here to see the lights and the most we saw was a faint color of murky green through the clouded sky on the first night. The only reason I have these pictures is because you can photograph the Northern Lights through the clouds. You just can’t see them.

I paid quite a lot and flew all the way to Whitehorse, Yukon from Boston in the middle of winter. I had fun with my friend, but I was just relieved to be in Palm Springs after that. We did some dog sledding one day and it was fun.

DON’T JUST PLAN A TRIP AROUND SEEING THE NORTHERN LIGHTS. GO SOMEWHERE YOU WANT TO SEE AND HOPE YOU CAN SEE THE LIGHTS.

This is why I strongly recommend Iceland, Norway, or Sweden. There are a lot of hot springs that you can chill out in and watch the lights too in Iceland. There’s just a lot more to see and do.

I liked Whitehorse, but I wouldn’t recommend going out of your way to see the Northern Lights there if there’s not something else you primarily want to do there. It’s a long flight and a lot of money for a chance you’ll get lucky.

Where to See the Northern Lights in Iceland

This place is literally built to view the aura lights. It’s in the middle of nowhere in Nesjavellir and it houses a gorgeous viewing deck above this hot spring. There’s virtually zero light pollution here too. 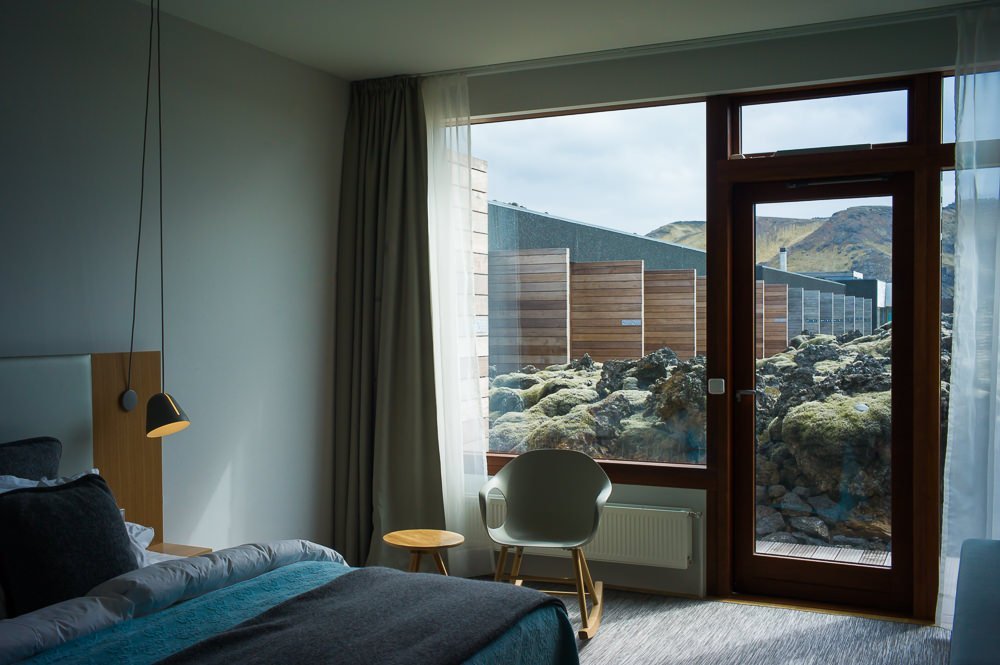 If you want to watch the Northern Lights from the Blue Lagoon, look no further. Iceland is developing but at the time I went, the Silica Hotel was the only property at the Blue Lagoon. If you want to watch the lights from the luxury of this hot spring, I highly recommend staying at the Silica Hotel. The Silica the Blue Lagoon is one of the most interesting properties that I’ve ever stayed at. The architecture is otherworldly and it’s located in the middle of lava fields. It’s also a short walk to the Blue Lagoon, but you also have full access to their own private lagoon which is nice. If you really want to know where to see the northern lights in Iceland, my answer is from this private lagoon. It’s euphoric.

Read my review of The Silica Hotel at the Blue Lagoon in Iceland for more specifics on why I fell madly in love with this property and its Scandinavian design.

This place books up super fast but if you prefer to see the Northern Lights in luxury, I do recommend at least one night here. I promise it’s an unforgettable experience even if you don’t see the aura lights.

The only thing I didn’t love about the place was their limited selection of food, although the restaurant at the Blue Lagoon is first-rate. But, it’s a luxury property and is somewhere I look forward to returning to in the future.

Catching the aura lights in Iceland obviously requires darkness. The darker the sky, the clearer the lights. Because of its geographic location, Iceland experiences seasons of extended days and nights.

Between mid-April and August, there are 24 hours of daylight, so it’s not the best time to see the northern lights in Iceland. But, the peak time to view the lights is between September and March where darkness takes over.

Again, if you read my story about my Yukon experience, you’ll know just how unpredictable the northern lights are. But, staying making sure

Where to Stay in Reykjavik to see the Northern Lights?

The Blue Lagoon and the Silica Hotel. Get out of the city and into a hot spring!!

Yukon Lights: What You Should Know About Seeing the Aurora Borealis in Whitehorse