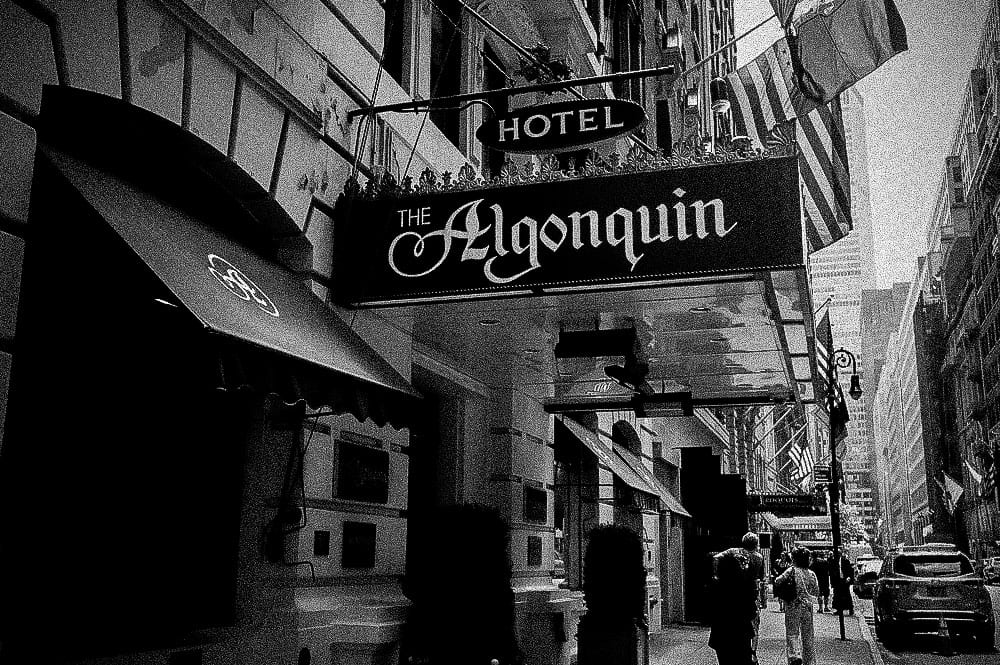 The Most Livable City in the World is Tokyo: Here is Why

We recently spent a long weekend at the Algonquin Hotel in Times Square.  There are a ton of places I want to stay at in NYC eventually, but this time around we ended up at The Algonquin Hotel. And with a government discount (now a Marriott affiliate hotel), we snagged a good rate.

I absolutely love staying at places that have a powerful and unique history of their own when I travel. I’m definitely not one of those who likes to cheap out on a room.  Often times, I find the hotel itself is one of the most memorable parts of the trip in terms of both comfort and historical depth, and The Algonquin is no exception. It’s the epitome of 1920s era New York.

Writers, theater critics, artists, and every who’s who at one point walked through this literary hotel’s doors, and if they were lucky enough, they landed at the Algonquin Round Table. It’s said that The New Yorker magazine itself was founded here among the literary elite. More interesting, The Algonquin Hotel is Manhattan’s oldest operating hotel.

The Algonquin Hotel sits on 44th street between Fifth and Sixth Avenues, and although my knowledge of NYC history is quite minimal, I do know that this street in itself is a treasure of interesting history from the past century. And the hotel is famous for having a long generation of resident cats. This tradition dates back to the 1930s, and if the in-house cat is female, they name it Matilda or Hamlet if a male is adopted.

So there’s a long lineage of Matlidas and Hamlets over the years…..But when talking to the concierge, he informed me that this cat isn’t just any cat. She’s a diva. In fact, on her birthday, the Algonquin Hotel hosts a party which is an “invitation only” affair that always attracts the press.

But upon walking my dog one night, I happened to look up and find myself at the footsteps of the one and only Harvard Club. Interesting I thought, as I peeked in the windows at the maroon walls of this secret society that commands attention from New York’s Elite. And as a fan of the classic movie American Psycho, I couldn’t help but feel a little intrigued by this mythic American world of Patrick Bateman types who’ve frequented the Club since its inception in 1894. It’s here too that you’ll also find The Penn Club across the street, or formerly known as the Yale Club. And close by, you’ll also see the NYC Yacht club, another invitation-only exclusive member society.

And seeming as The New Yorker was founded within the walls of The Algonquin Hotel, it makes sense that its location is nearby too. In fact, it’s a few blocks down the street at 28 W 44th Street, but now you’ll only find an empty office building awaiting development. But inside the locked brass doors, you see a placard, reminding you this was home to one of the literary world’s most influential magazines for over 50 years, between 1941 and 1992.

And across the street from the Algonquin Hotel, you’ll find the Sofitel New York, another famous spot, but for its somewhat recent international scandal in 2011 when Dominque Strauss-Kahn, the then Managing Director of the International Monetary Fund allegedly raped the housemaid in his room. This brought scandal and attention to the IMF and placed the Sofitel on the international radar.

And one more thing. If you’re feeling a little extra splurgy and happen to have $10,000 laying around with no better use, then perhaps you should order the Martini on the Rock that comes with a pre-selected diamond at the bottom of the glass. This makes The Algonquin Hotel home to the most expensive cocktail in Manhattan and one of the most expensive in the world.

As for the rooms, the linens were of high quality and very comfortable. The rooms are older so a little smaller, but beautifully decorated. I enjoyed the old-fashioned letter desk. This is a pet-friendly hotel, (small animal friendly) and they charge no extra fee for pets. But you must inform the staff at least 24 hours prior to check-in. 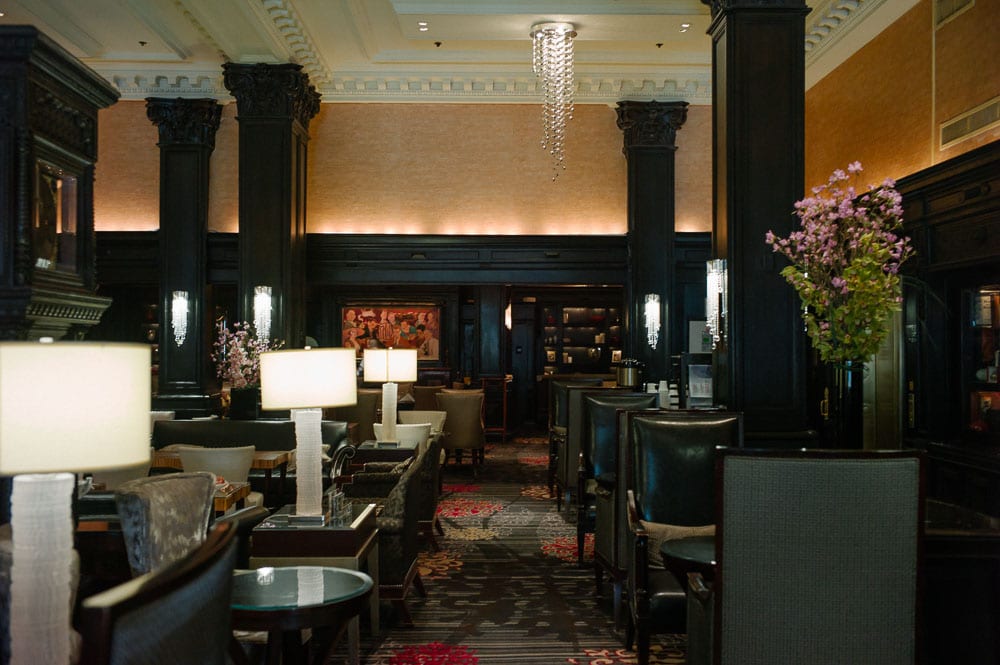 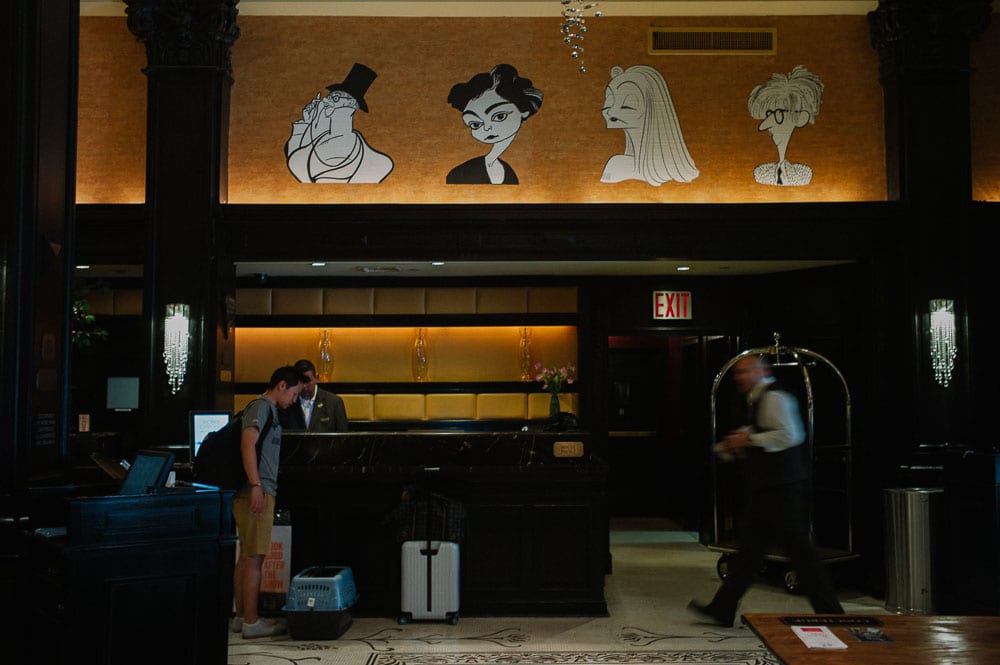 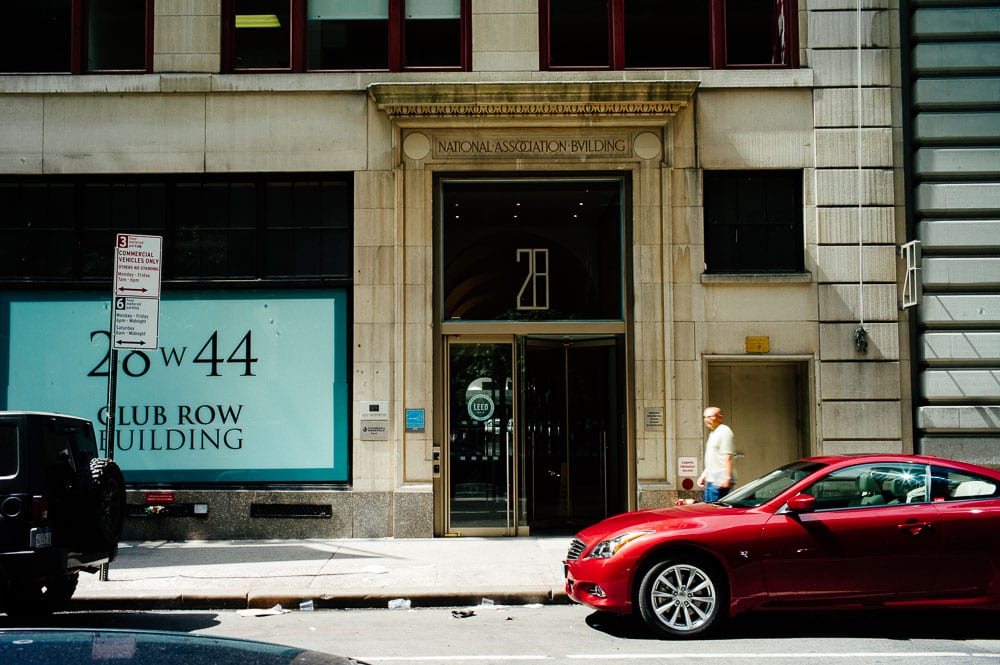 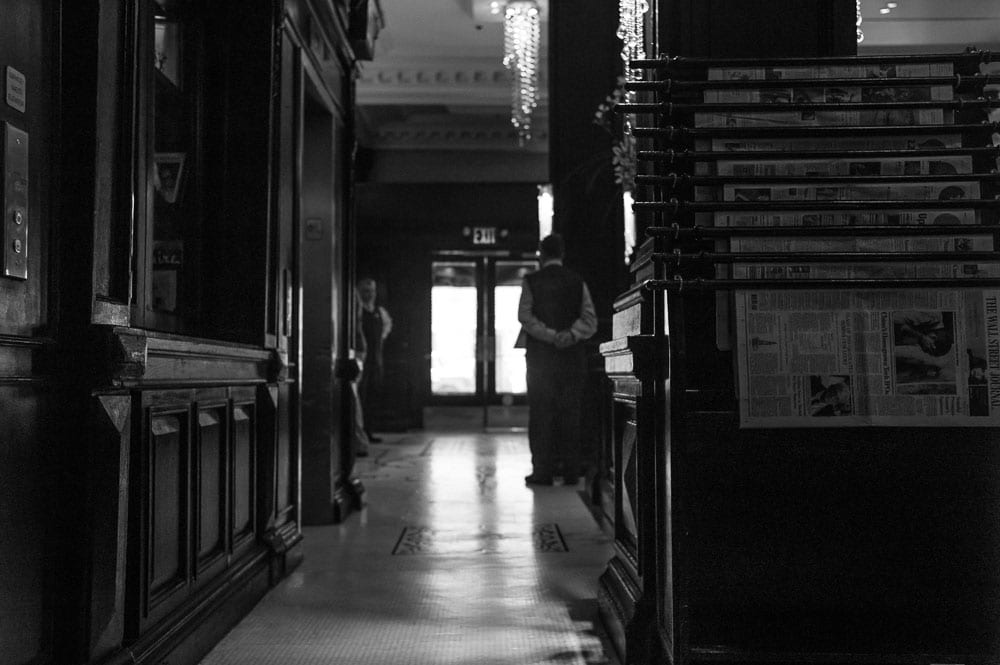 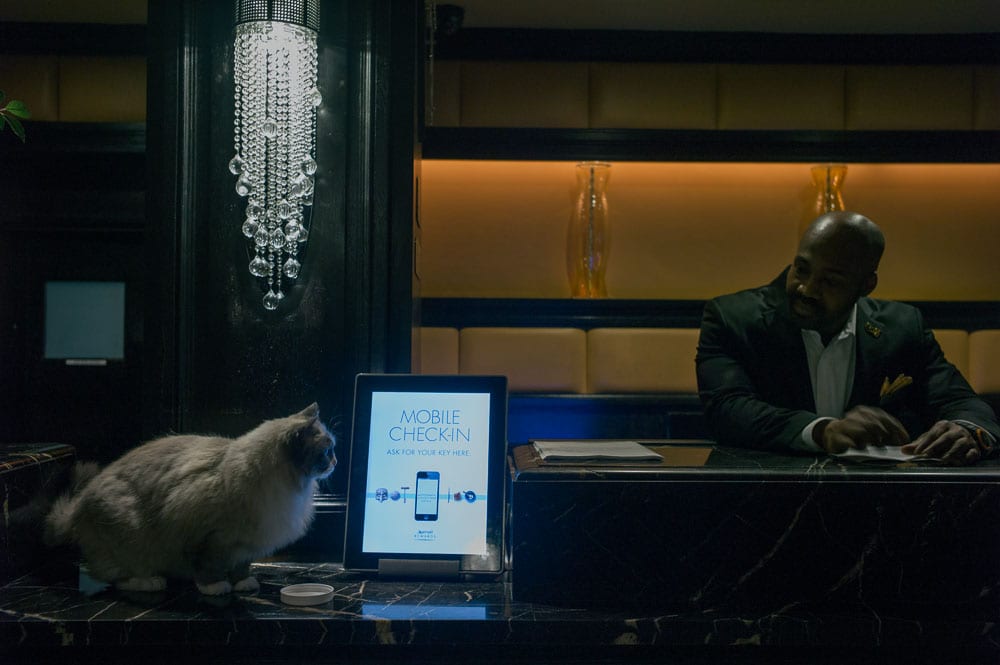 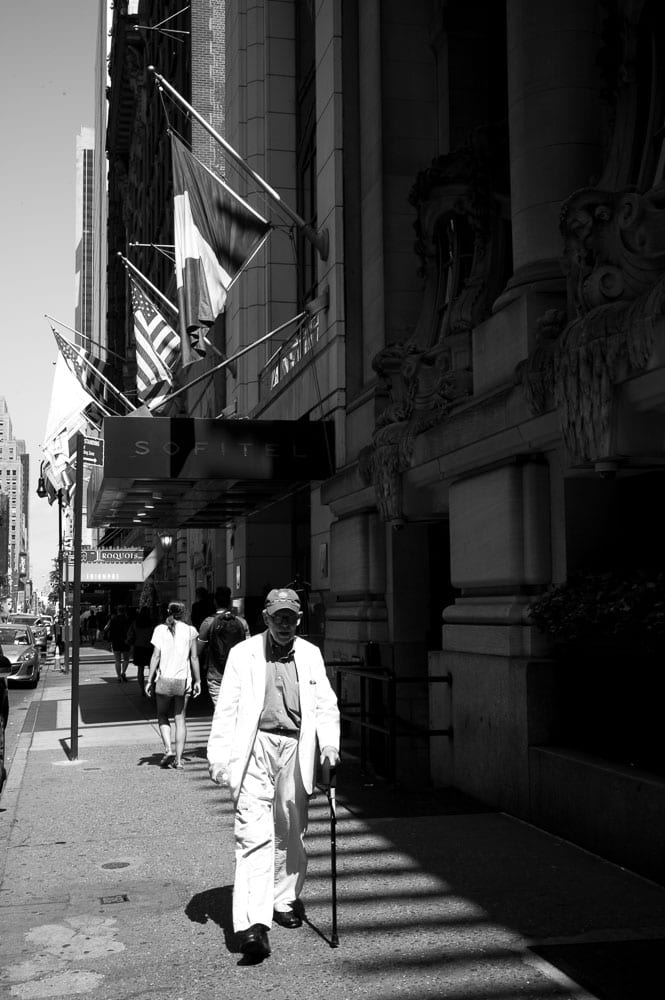 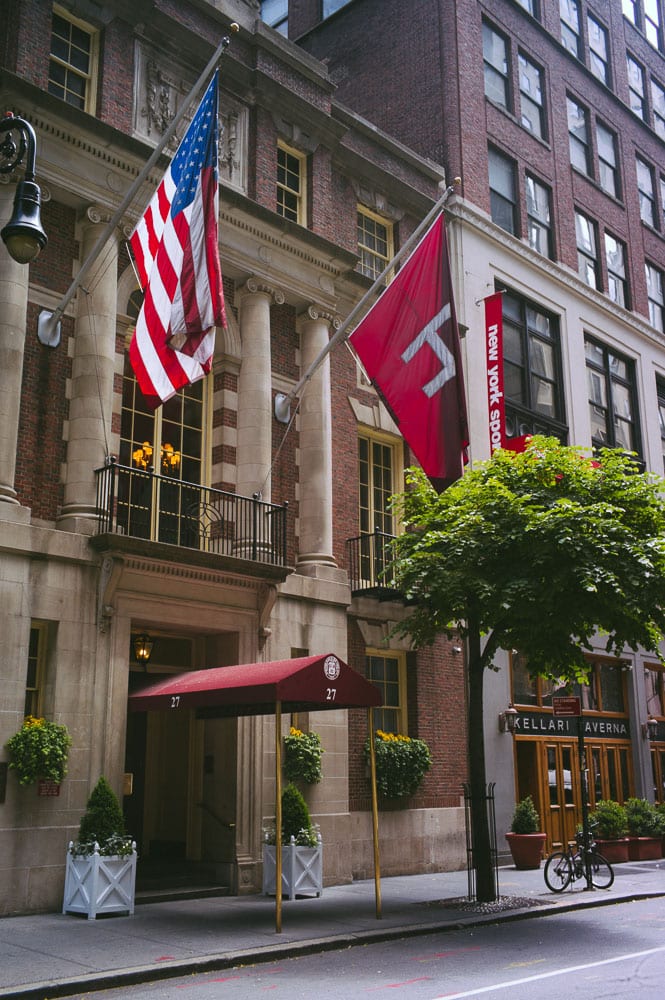 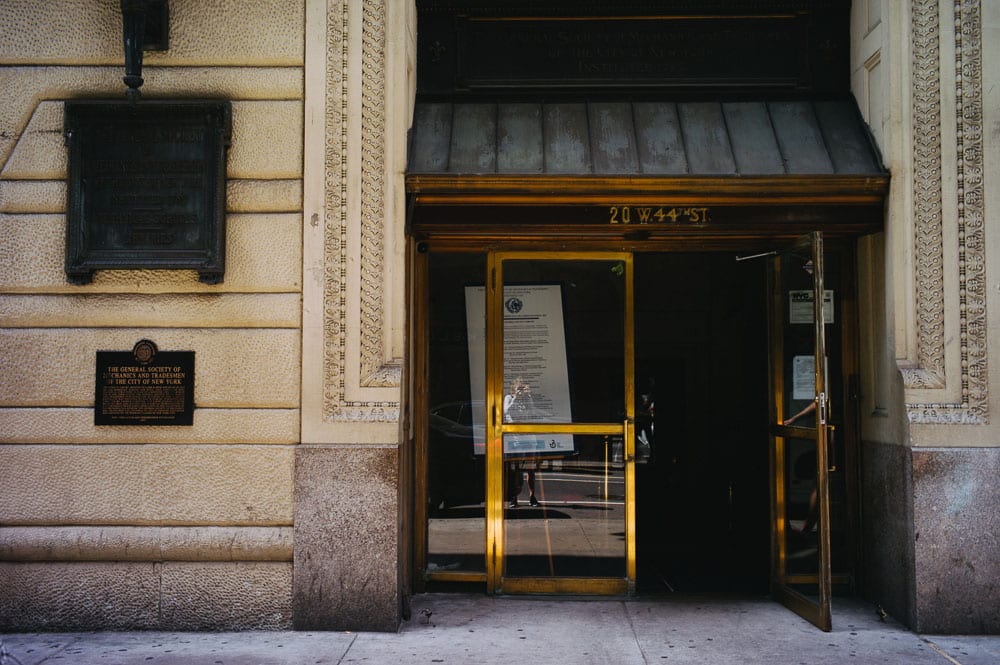 Photographs: 1) The Algonquin Hotel 2) The Lobby / Restaurant where you can read the newspaper and sip coffee 3) Check-in caricatures 4) Portrait of The Round Table 5) 28 W 44th home to The New Yorker for about 50 years 6) The Algonquin Lobby 7) 44th Street and The Penn Club 8) Matilda who lives on the counter of the hotel 9) Classic hotel view 10) Man walking in front of The Sofitel NYC 11) The Harvard Club 12) The General Society of Mechanics and Tradesman, another historic landmark worth checking out

5 Fantastic NYC Things to Do in The Meatpacking District