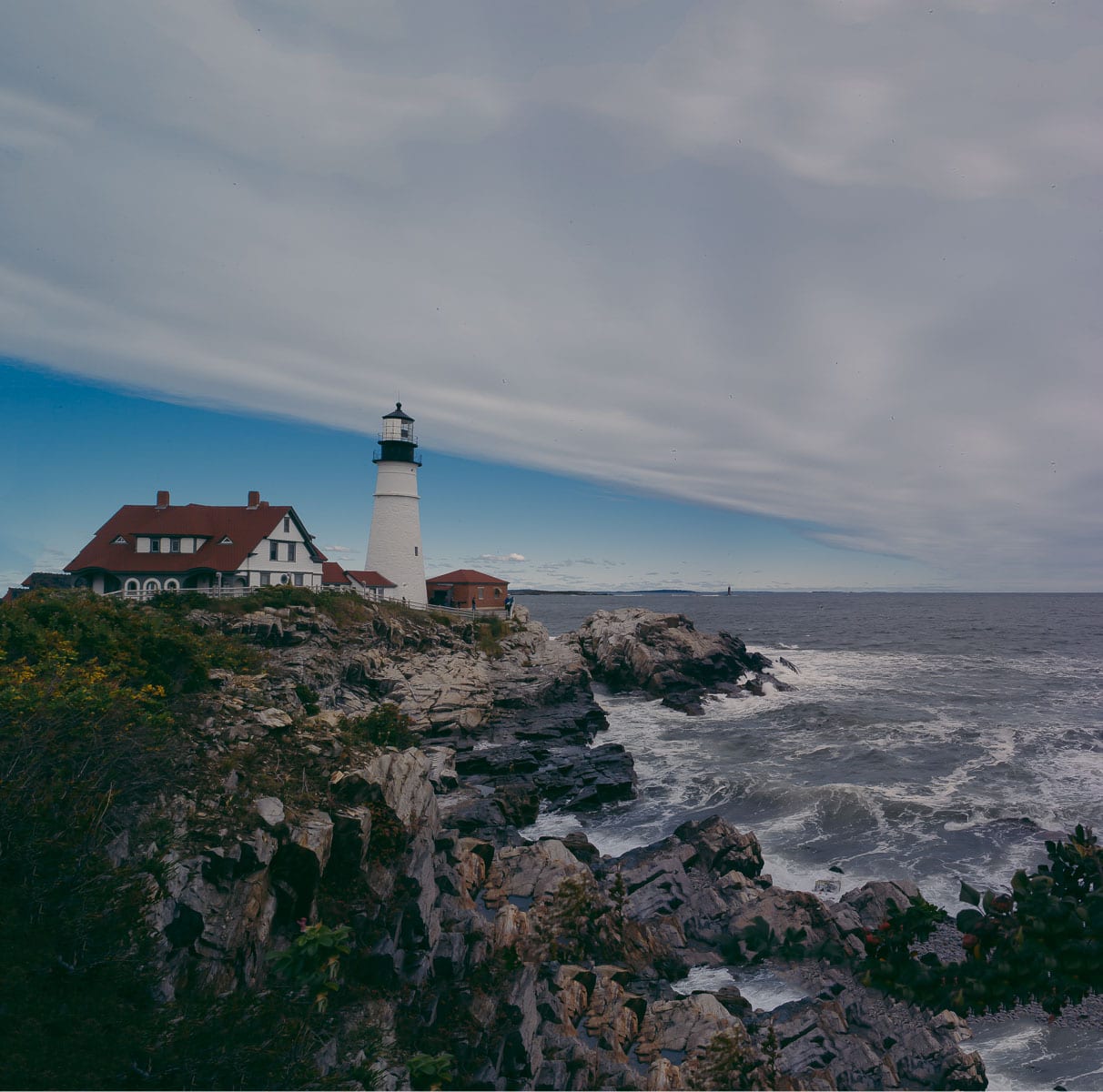 This was my first visit to the Portland Head Lighthouse in Maine and although we planned on stopping off at a lighthouse on the trip, I never put much thought into which one. Of course seeing a lighthouse or two was on my to-do list while traveling to Maine, but I never expected to enjoy it quite so much.

Fortunately, the weather made for excellent picturesque photographs. I always pictured Maine’s lighthouses to stand eerily above the coastline, un-shielded by stormy seas, with a dense foggy light rolling in over cliffs.  I hoped to see this kind of Maine, a spooky kind of Maine built up in my mind through myth and imagination. There’s always something a bit eerie about lighthouses though, and no doubt, this landscape takes on a much spookier facade during the winter.

When I got out of the car I felt enamored by the beauty of blue skies, perfectly painted clouds, and raging water crashing onto the rocks below. The landscape understandably has inspired numerous artists over the years and we couldn’t have picked a more beautiful day to visit. 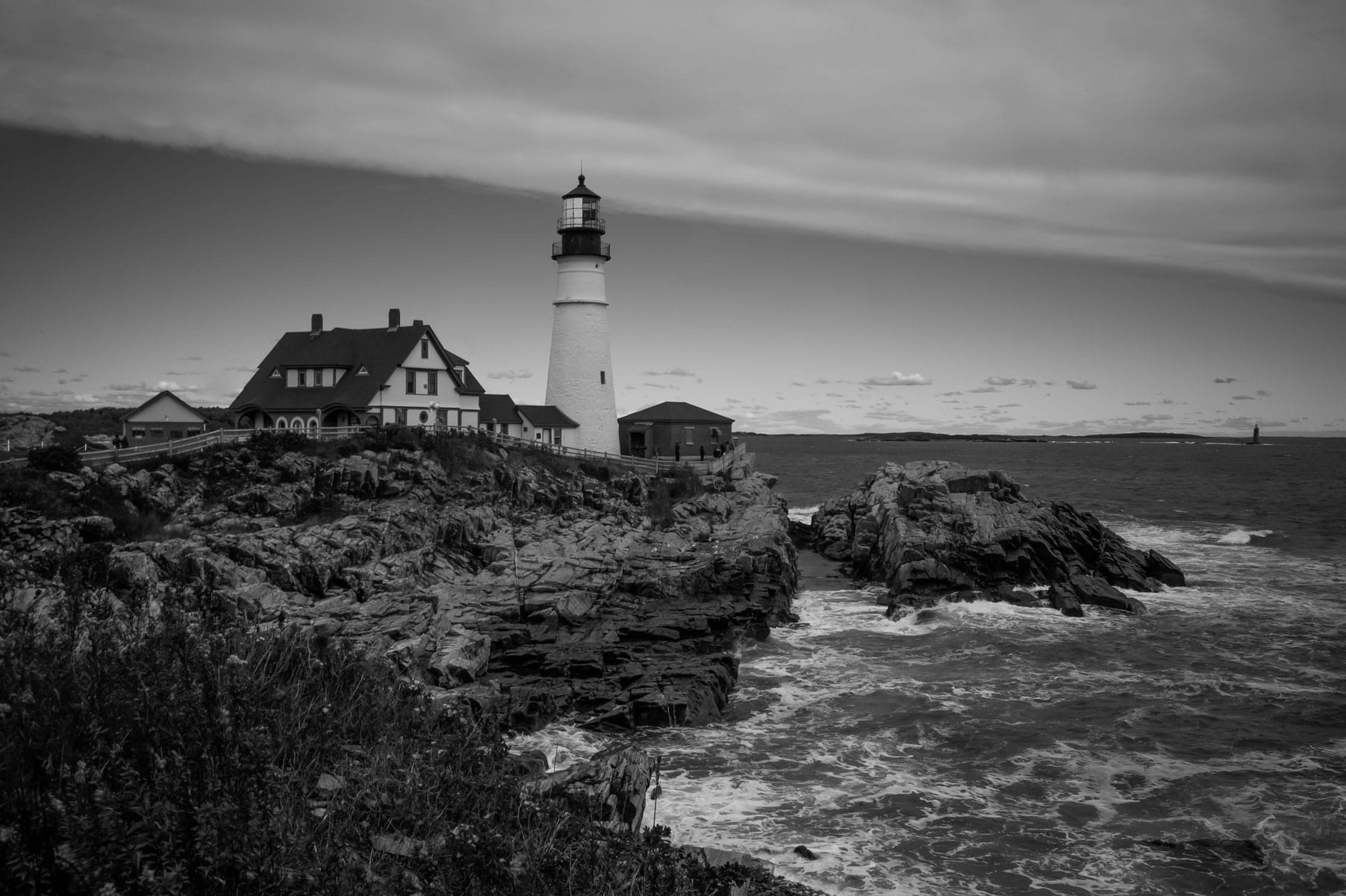 The poet Henry Wadsworth Longfellow grew up in Portland, Maine (1807-1882), and wrote a beautiful poem about the Portland Head Lighthouse which he titled The Lighthouse. If you’re more curious, you can also visit the Wadsworth-Longfellow House in Portland.

The rocky ledge runs far into the sea,

And on its outer point, some miles away,

The Lighthouse lifts its massive masonry,

A pillar of fire by night, of cloud by day.

Even at this distance I can see the tides,

Upheaving, break unheard along its base,

A speechless wrath, that rises and subsides

In the white lip and tremor of the face.

And as the evening darkens, lo! how bright,

Through the deep purple of the twilight air,

Beams forth the sudden radiance of its light

With strange, unearthly splendor in the glare!

Not one alone; from each projecting cape

And perilous reef along the ocean’s verge,

Upon the brink of the tempestuous wave,

Wading far out among the rocks and sands,

The night-o’ertaken mariner to save.

And the great ships sail outward and return,

And ever joyful, as they see it burn,

They wave their silent welcomes and farewells.

They come forth from the darkness, and their sails

Gleam for a moment only in the blaze,

And eager faces, as the light unveils,

Gaze at the tower, and vanish while they gaze.

The mariner remembers when a child,

On his first voyage, he saw it fade and sink;

And when, returning from adventures wild,

Year after year, through all the silent night

Burns on forevermore that quenchless flame,

Shines on that inextinguishable light!

It sees the ocean to its bosom clasp

The rocks and sea-sand with the kiss of peace;

It sees the wild winds lift it in their grasp,

And hold it up, and shake it like a fleece.

The startled waves leap over it; the storm

Smites it with all the scourges of the rain,

And steadily against its solid form

Press the great shoulders of the hurricane.

The sea-bird wheeling round it, with the din

Of wings and winds and solitary cries,

Blinded and maddened by the light within,

Dashes himself against the glare, and dies.

A new Prometheus, chained upon the rock,

Still grasping in his hand the fire of Jove,

It does not hear the cry, nor heed the shock,

But hails the mariner with words of love.

And with your floating bridge the ocean span;

Be mine to guard this light from all eclipse,

Be yours to bring man nearer unto man!” 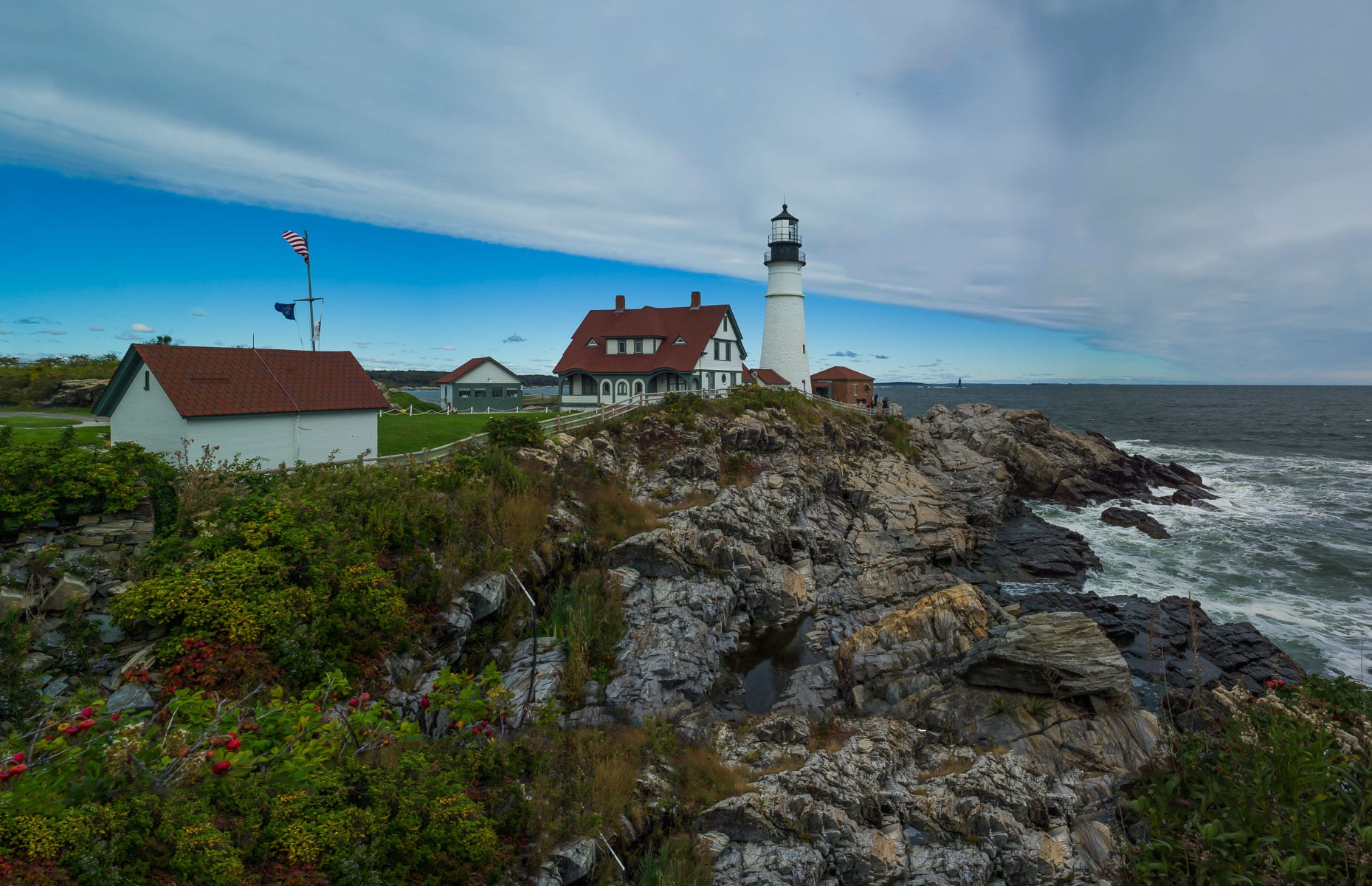 The Portland Head light was constructed in 1787 under the eye of George Washington, making it the oldest lighthouse in Maine. On-site, there’s a museum (an old house) that houses the history of the lighthouse as well as interesting details about the daily life of its keepers and their families.

Unfortunately, you can’t visit the tower itself, but it is open 1 day out of the year on national lighthouse day in Maine on August 7th. I had no idea this holiday existed! I recommend a visit here if you’re in Portland. Cape Elizabeth is a short beautiful drive away.