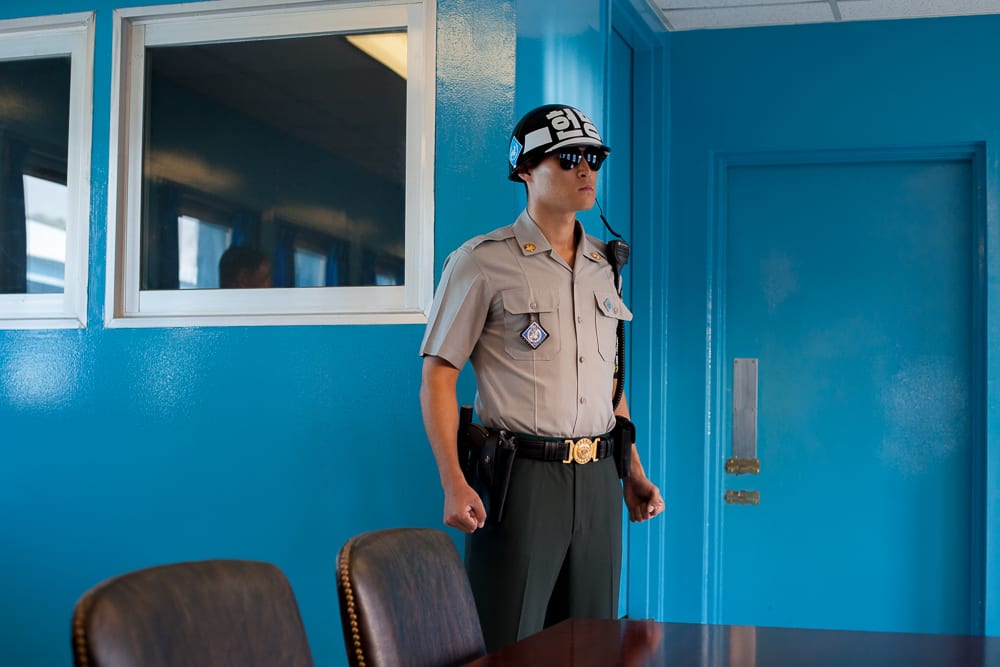 DMZ Tour: How to Travel to the Joint Security Area of South Korea

By far, one of the most fascinating places I’ve ever been to is the Panmunjom Joint Security Area located inside the DMZ at the border of North and South Korea. In fact, this is one of the most unique places in the world. I highly recommend a DMZ tour.

Joint Security Area Korea: What Exactly is the JSA and What is Its Purpose?

In essence, the JSA or Joint Security Area exists within the Demilitarized Zone (DMZ) to act as a buffer between North and South Korea along the 38th Parallel. Within this zone, the JSA acts as a meeting point between both sides. The JSA is the location where all negotiations since 1953 have occurred. It’s here you will find ROK soldiers standing in a face to face détente with North Korean soldiers.

By far, one of the most fascinating places I’ve ever been to is the Panmunjom Joint Security Area located inside the DMZ at the border of North and South Korea. In fact, this is one of the most unique tours in the entire world.

The JSA is the location where all negotiations since 1953 have occurred. It’s here you will find ROK soldiers standing in a face to face détente with North Korean soldiers.

To get to the JSA you will need a military escort to take you there as opposed to just visiting the DMZ.

Panmunjom and the Joint Security Area are often used interchangeably, but Panmunjom is actually an abandoned village just north of the de facto border of North and South Korea where the 1953 Korean Armistice Agreement was signed. Today, none of this village actually remains.

After the 1953 agreement, the Joint Security Area was constructed to house talks between the United Nations Command (UNC) and both the North Koreans and their regional ideological ally, China. 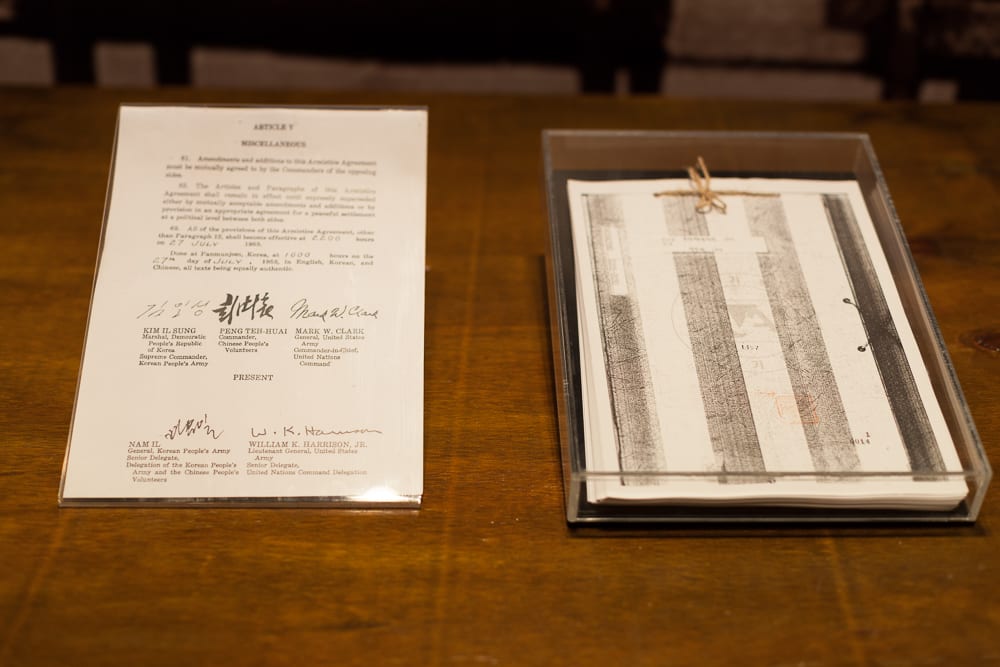 I spent a lot of time in South Korea over the course of a couple of years so my first visit to the border was to the DMZ. I returned again to visit the JSA. 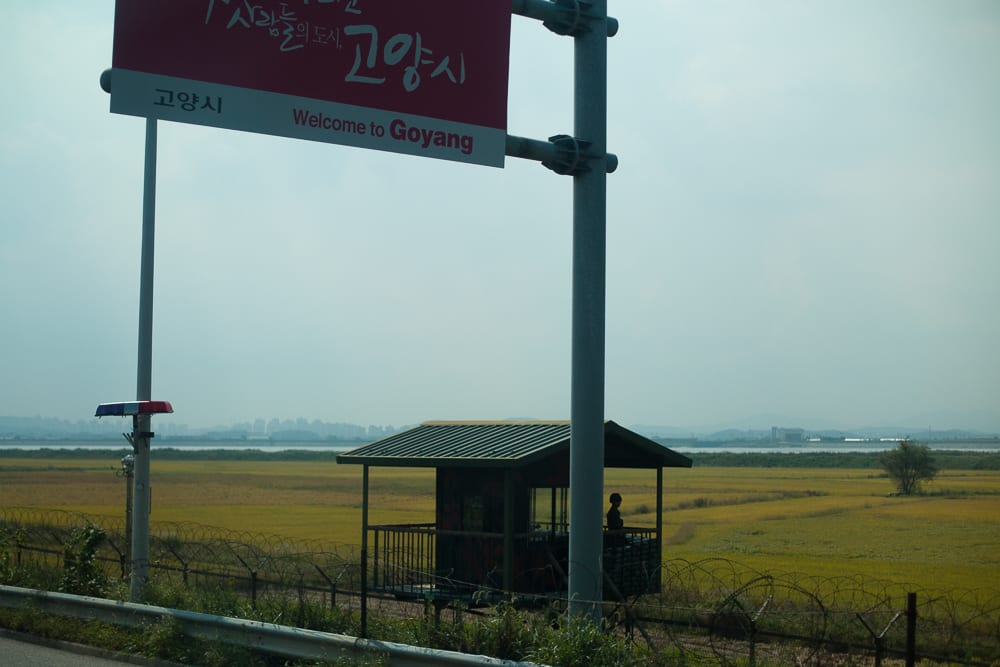 On my last trip to South Korea, I went to the border alone. After booking arrangements this time a week early, I got on a bus one morning and rode an hour’s drive to the border down Unification Road.

I found myself sitting next to a rugged Army vet who spoke little but managed to inform me that the bracelet on his wrist is worn out of respect for the friends he lost on 9/11. He was there at the World Trade Center.

The bus ride was quiet and I remember everyone silently gazing out over the heavily armed border, out into North Korea. Once we left Seoul, the tone shifted.

A Panmunjom tour, however, isn’t without its risks. This is the most heavily armed border in the world and tensions between North and South Korea are always simmering. There are always joint military exercises between the US and South Korea and without fail North Korea threatens action in protest. 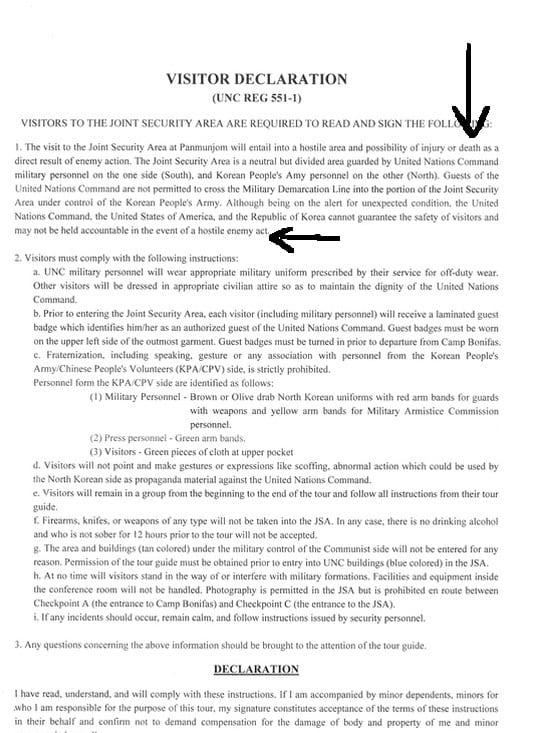 Was I nervous about visiting? A little. The agreement in 1953 is a ceasefire agreement which just means the two countries are still technically at war, as seen by previous incidents in history that have broken out.

When you visit the JSA, you are first taken to Camp Bonifas base camp where you’re given a briefing in Ballinger Hall. It’s here you are handed a Visitor Declaration to sign. Camp Bonifas was last attacked by the North Koreans on August 29, 1967, which killed one US and two ROK soldiers and wounded 24 others. Upon entering the camp, you’re told to stop filming or recording anything.

Sometimes it’s easy to have a false sense of security when you travel, but you are required to sign this form acknowledging that you’re entering a war zone and death is possible.

At this point, I got a little anxious but my Army friend on the bus assured me that men I never knew existed would swarm out of nowhere to protect us and there are a ton of landmines as well. Awesome.

As we headed into the JSA, we were cautioned not to make any gestures or eye contact with any of the North Korean guards as they often try to create attention. They told us they often try to distract ROK soldiers and make funny faces outside of their windows. They referred to one of their buildings as the monkey house for that reason. 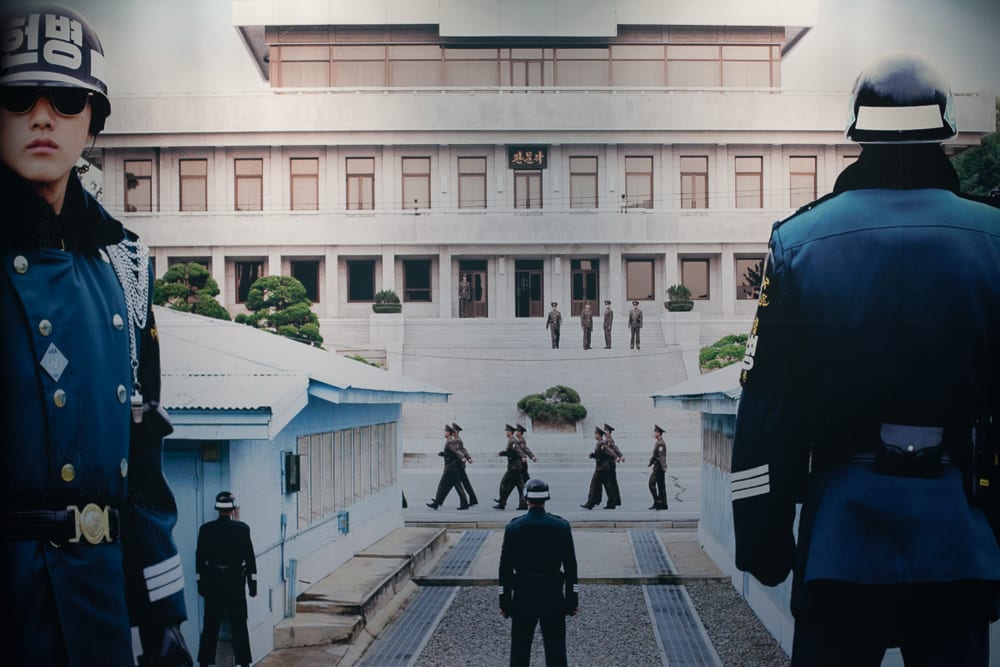 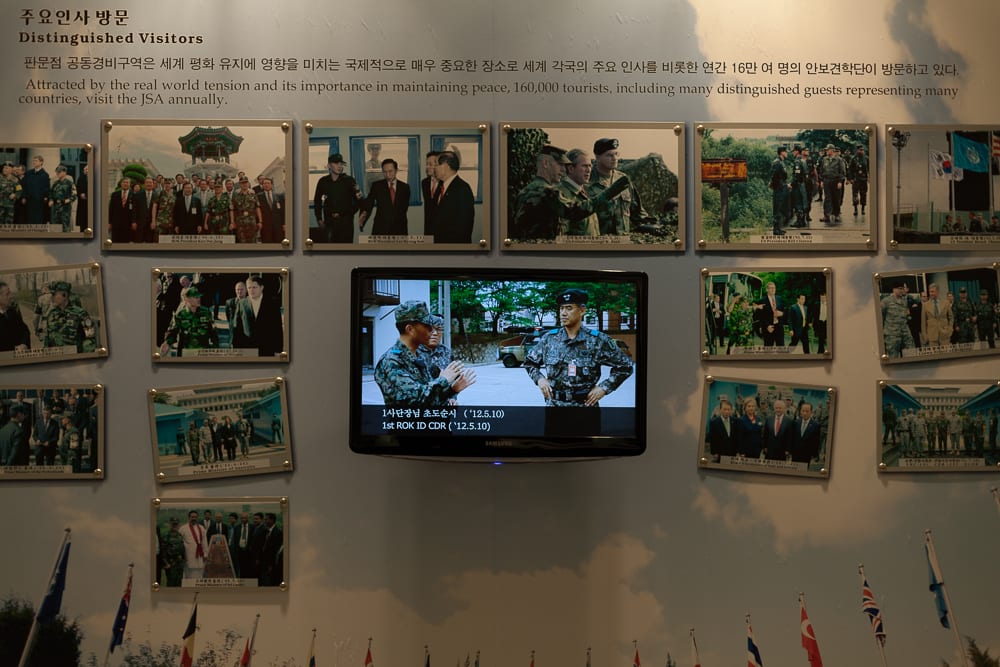 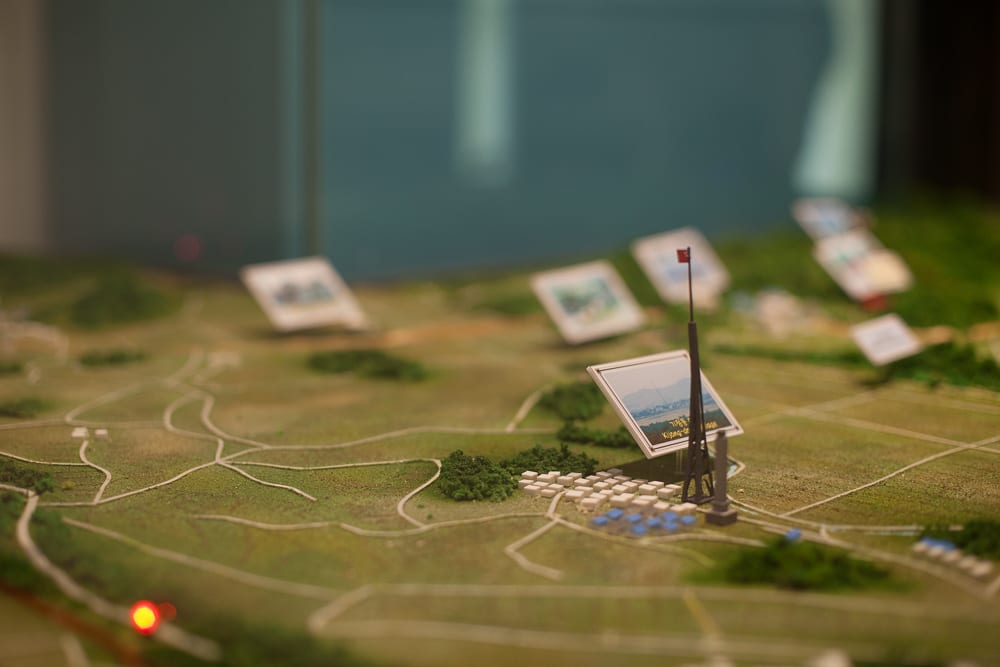 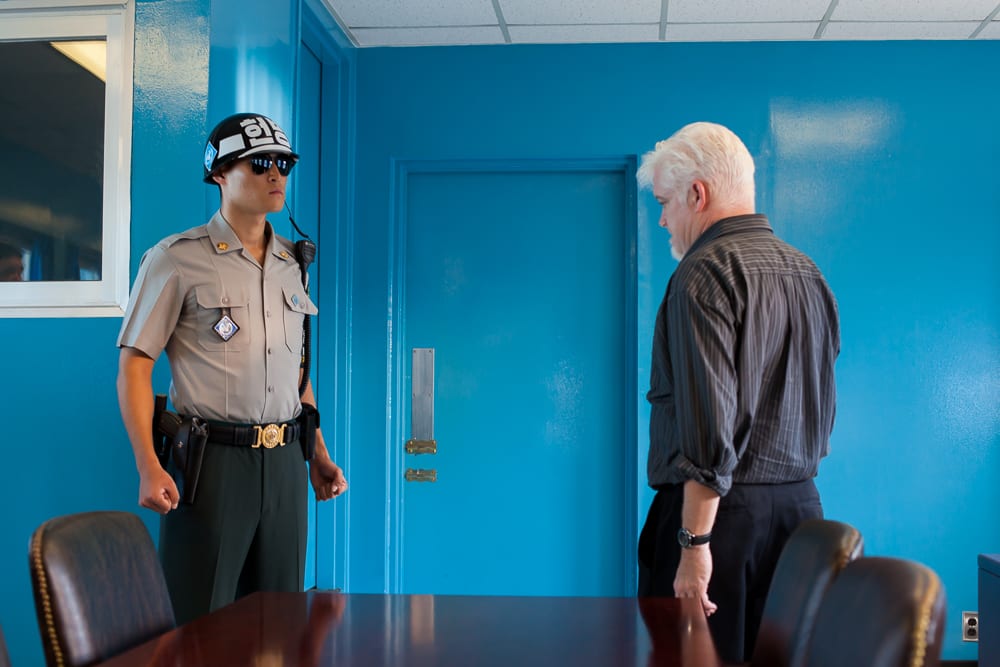 If you look in the center of the photograph above, you can see a ridge on the ground. This is the Military Demarcation Line (MDL) defining North and South Korean territory around the 38th Parallel. Also, below, a closer photo of the MDL taken from inside the UN Command Military Armistice building.

There are many tours available, here are a few of my recommendations. Again, you’ll need to book in advance to ensure proper background and passport checks.

There are some VERY interesting tours available. Personally, I wish I could have taken a tour with North Korean Defectors! But these are great options and Viator is super easy to book.

FACTS TO KNOW BEFORE YOUR JSA TOUR

A JSA tour can take up to a week process so this does need to be planned in advance and is not a tour you can phone up one day and join. It’s easy to schedule a visit to see just the DMZ, but it takes more effort to see JSA. Policies change so check ASAP with a company if you know you want to visit. UN requires all passengers to provide a passport copy at least 3 days before the travel day and on other tourism websites, you will see 7 days in advance. Book ASAP in advance if you want to go. You will need your passport. A strict dress code applies for all visitors: “faddish, extreme, torn, tattered, frayed, overly provocative or otherwise inappropriate” clothing is not allowed. Sports clothes (incl. tracksuits), military clothing, oversized clothing, sheer clothing, sleeveless shirts/tops, tank tops, and flip flops and similar sandals are specifically banned. Certain countries are restricted access to tours. Telephoto lenses over 90mm are not allowed.

Each of the tour buses with all companies are designed and approved by the UN. You will need to join one of the companies in Seoul that has access to this area. On June 24, 1951, North Korea though a Soviet Ambassador to the UN recommended that a truce line be formed on the 38th Parallel. The JSA straddles the Military Demarcation Line. The MDL passes through the center of the negotiating table in the Military Armistice Commission. Each country set up their own village, Freedom Village ROK, and DPRK’s Propaganda Village. You can ID each village by its flag. Heads of State and numerous US Presidents have visited the JSA on similarly scheduled tours. The ROK Ready stance is the famous Tae Kwon Do stance that ROK soldiers hold when visiting the JSA. This is to communicate to the DPRK not to pull any tricks. Read more about ‘ROK Ready’ Soldiers. Read about the famous Ax Murder Incident

The Bridge of No Return is the spot where all POWs were repatriated after the end of the war.

North Korean Soldier in JSA Rants about US Imperialism

In Essence…A DMZ Tour is Unforgettable

I totally recommend a visit and a DMZ Tour. It will open your eyes to the reality of a conflict that we hear about 24/7. It’s one thing to hear about the North and South Korean conflict, but it’s another to witness for yourself the reality of these delicate tensions on the ground. It’s indescribable. Plus, you can actually say you’ve stepped foot in North Korea.

Getting Spooked by Alcatraz at Night: My Alcatraz Night Tour Review