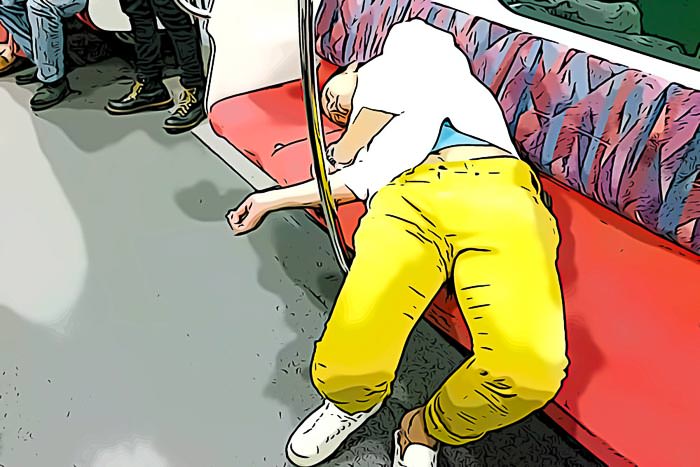 17 Brilliant Only in Japan Things to Do

Are you traveling to Japan or to Tokyo and want to know more only in Japan things to do? This article definitely helps, but if you truly want to unlock the weird amazing side of Tokyo, I highly recommend my book Hidden Tokyo.

Japan is my favorite country in the world because you will never run out of cool things to do. It’s literally impossible to get bored in Japan.

Aside from its extreme beauty and culture, Japan offers so many truly unique things to do. Here’s a list of only in Japan things to do that cannot be done anywhere else in the world. And by no means is this list exhaustive. I am only scratching the surface.

It only took five months of full-time writing and four years of relentless exploration around Tokyo. You will find over 400 pages of recommendations and places that you honestly cannot possibly ever know about without extensive exploration from actually living there. If you truly want to experience Tokyo’s magic, this book will show you how. 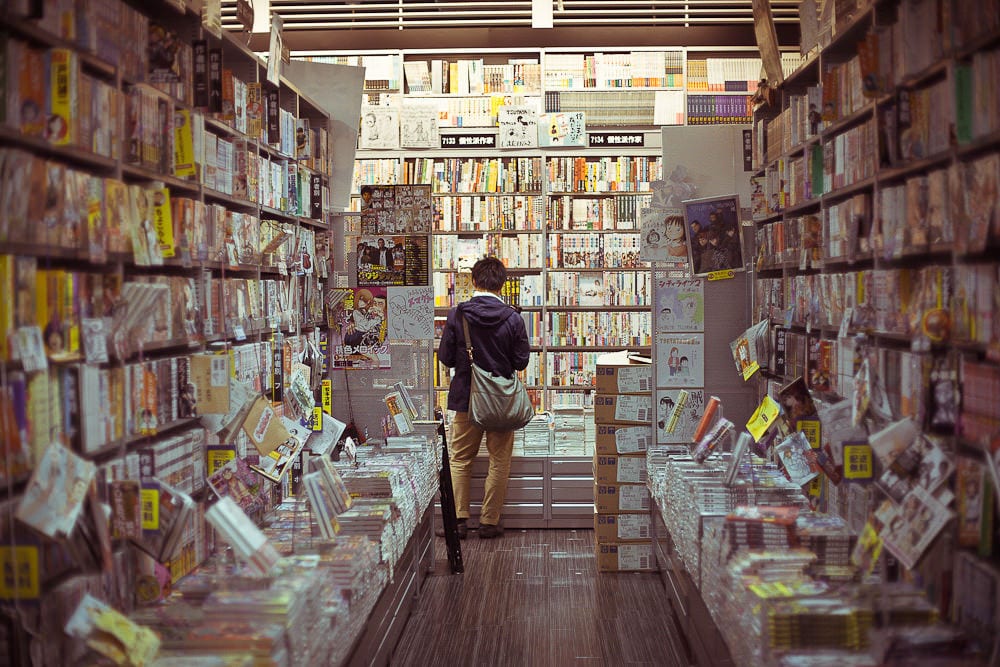 A Manga Kissa is the term for a Japanese comic book shop and it’s one of my favorite only in Japan things to do. But unlike comic book shops in America, these are often located on the 5th floor of some random building that looks obscure.

You’ll wander up a flight of stairs or a tiny elevator and find yourself in a world of anime. These shops are extremely colorful and quiet.  And they hate for you to take pictures, so you must be sneaky.

This is one of my favorite only in Japan things to do – a video game arcade! These are not only goldmines for people watching, but the energy is always insane and it’s super fun to play yourself.

This is where you go to watch young men get REALLY into Dance Dance Revolution or to witness girls of all ages get really unhinged after wasting an hour and 10,000 yen at a claw game trying to win a cheap stuffed animal with large eyes.

ファミレス is Katakana for family-style restaurant. These kinds of restaurants are really popular in Japan, especially Denny’s or Jonathan’s. You’ll find a ton of salarymen getting drunk as well as young people who are either meeting up for hobby groups, late-night after-hours food, or study groups.

I actually used to meet a language exchange friend at the Denny’s in Shibuya every week for several months. The tables are really big which makes it a nice place to study with friends and eat cheaply.

4. Standing In Line all Day for Pancakes 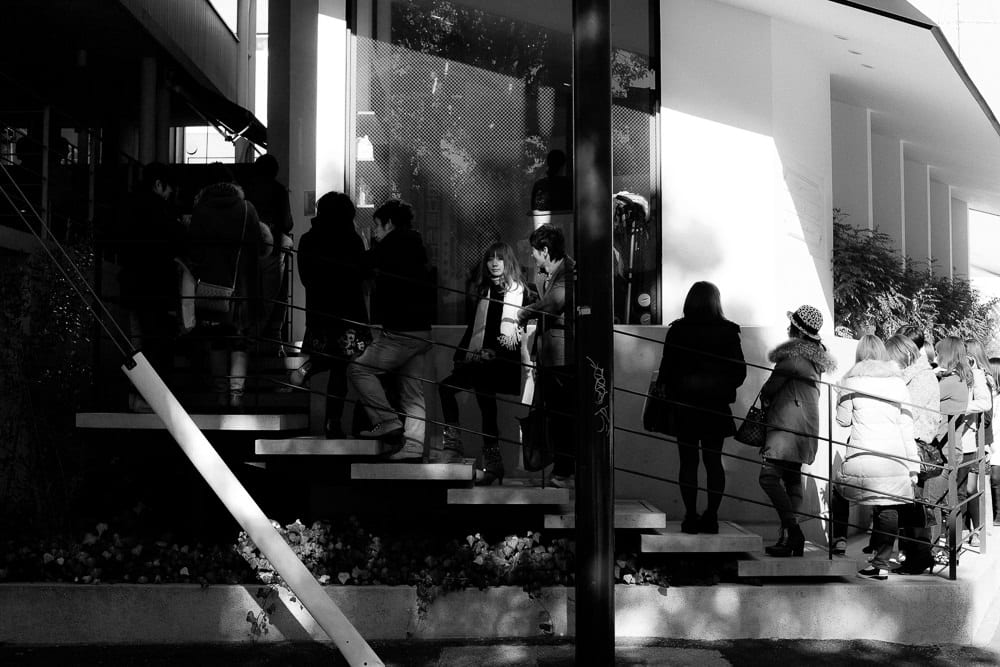 Pancakes are a cultural phenomenon in Tokyo and in Japan. You can find tons of different kinds of pancakes, some you’ve never had before in your life. But one thing Japanese people love as much as pancakes is standing in line for pancakes!

I once waited for 2 hours one time for at Rainbow Pancake in Harajuku in Tokyo. But in the end, I swear it was totally worth it. The Macadamia Pancakes were one of the best things I’ve ever had.

Everyone has heard of Karaoke, but Japanese karaoke is out-of-this-world. You go out with friends, you rent a private box, you pick your songs, and you have a waitress come and bring you lots of food and extravagant desserts. It’s one of the top only in Japan things to do.

But, if you’re lucky enough to find yourself in a karaoke bar, then you’ll never forget the way those salarymen come to life singing Hey Jude. This should be on everyone’s bucket list of things to do in Japan.

6. Themed Restaurants & Animal Cafes | Only in Japan Things to Do

On the left, is chicken meatloaf. On the right, is banana bread. BOTH dishes were for my dog, Benji. Japan spoils its animals, to say the least.

From robots to cats to Alcatraz, Japan has a love obsession for themed restaurants. There’s something exciting about a night at one of these places, though, because you never quite know what to expect. 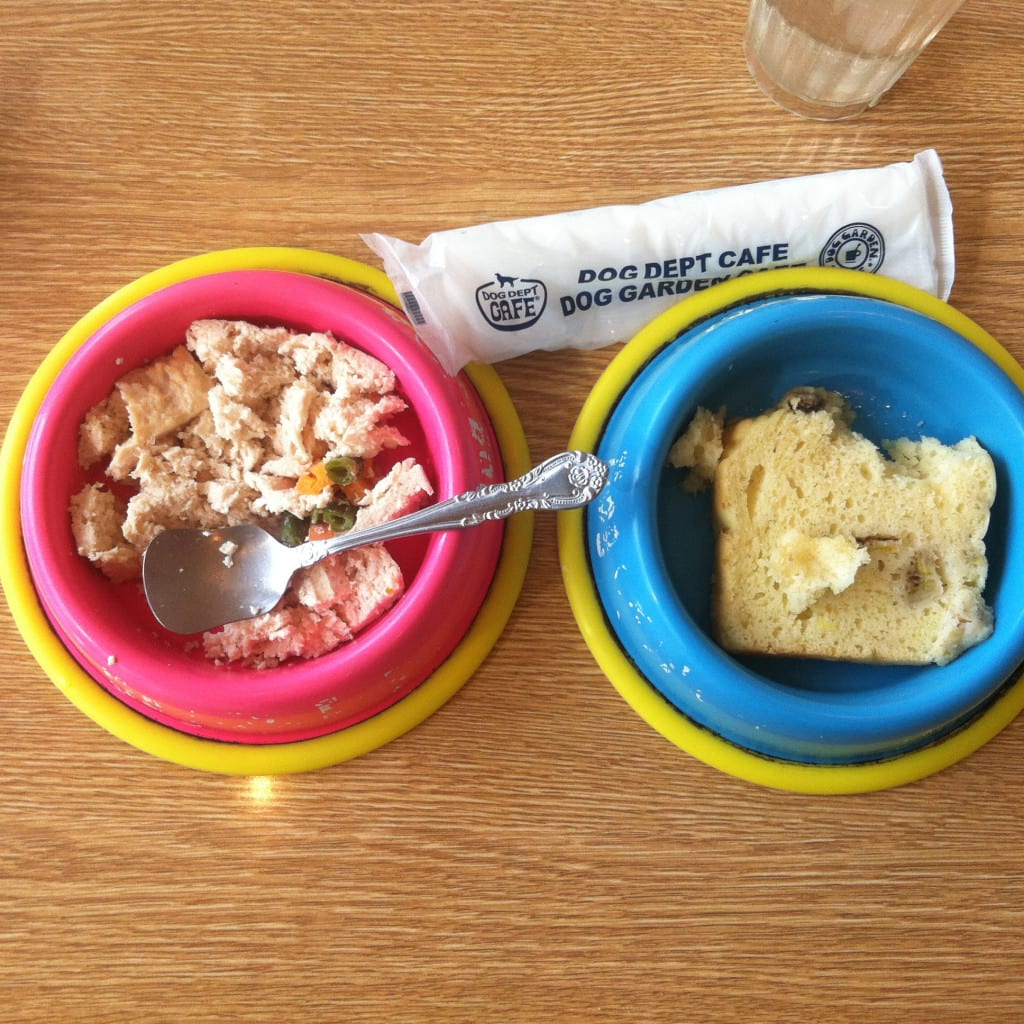 7. Hanami 花見 Only in Japan Things to Do 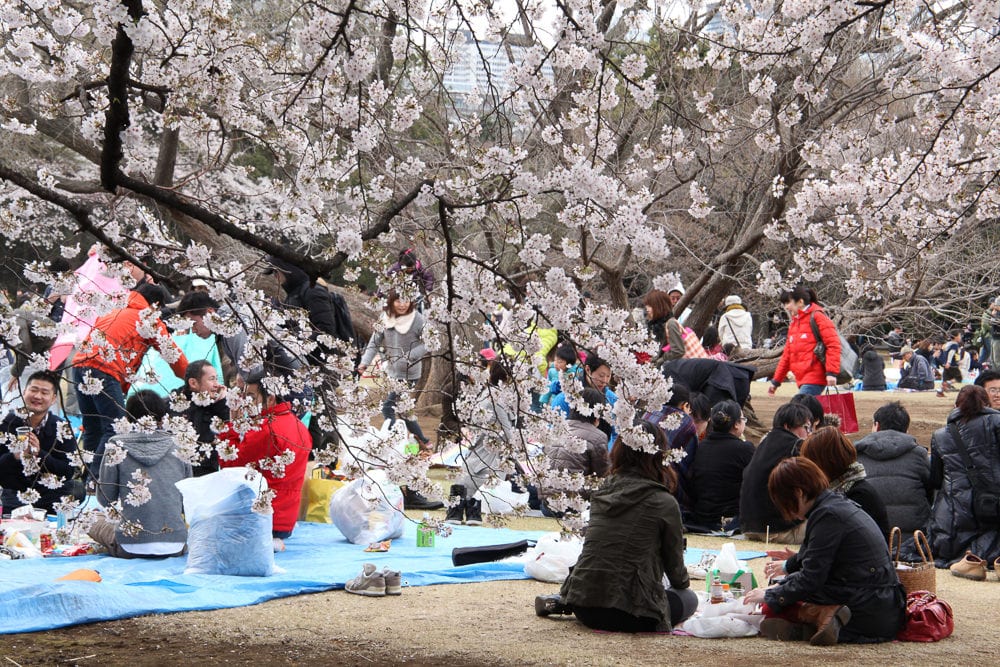 Hanami is the act of picnicking under cherry blossom trees with your friends for the entire day or even week. Everyone gets super drunk and takes a ton of pictures. If you want to go to Japan, I suggest trying to go during cherry blossom season. Read Cherry Blossoms Japan: When Should You Visit?

Are you traveling at all on the bullet train? You’ll want to get a JR Pass. The Shinkansen is super expensive without it. Get your JR Pass today and have it FedExed to you within days. Don’t wait to purchase your pass. Purchase it here.

8. Don Quijote ドンキ | Things to do in Japan at Night 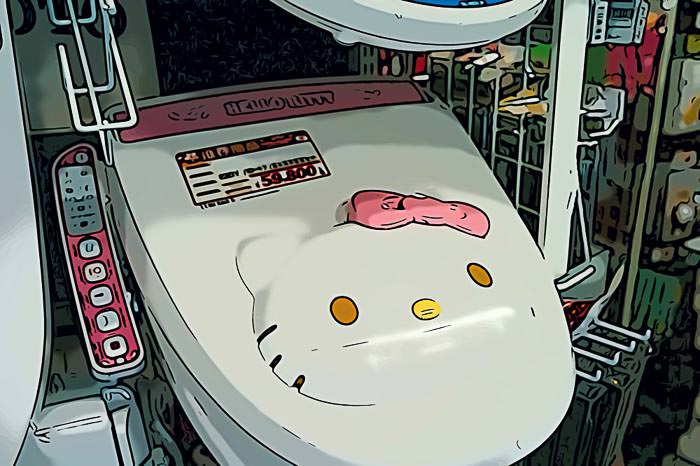 If you’ve never been to a Don Quijote, I highly suggest you find time to go during your next visit to Japan. Better yet, go after a night out because it’s more fun and interesting.

You can find everything from insane Japanese facial exercises, animae costumes, sex toys, luggage, designer handbags, a shit ton of scrunchies with polka dots, and literally everything and more you’ve never heard of. You know how Japan is famous for inventing all kinds of crap NO ONE else has ever heard of? Well DONKI is where they sell it all.

Yes, a head spa. No such thing exists in America, but in Japan, a head spa is a menu item that you’ve secretly wished for all along. It’s not a haircut or a color, it’s a full hour head and scalp massage with multiple different oils and scalp treatments. It feels awesome, especially on days you have a headache. If you’ve ever watched an ASMR video, this is the real deal. I just can’t believe this market for massage doesn’t exist in America.

Konbini is short for convenience store. Instead of 711 with shoddy Big Gulps and hot dogs that might do a number on your digestive system, the convenience store food in Japan is an entirely different caliber. Yes, you can actually eat dinners here, GOOD dinners. And don’t forget to try Karaage (chicken nuggets) from the Lawson.

11. Wisteria Tunnels & Gardens | Only in Japan Things to Do 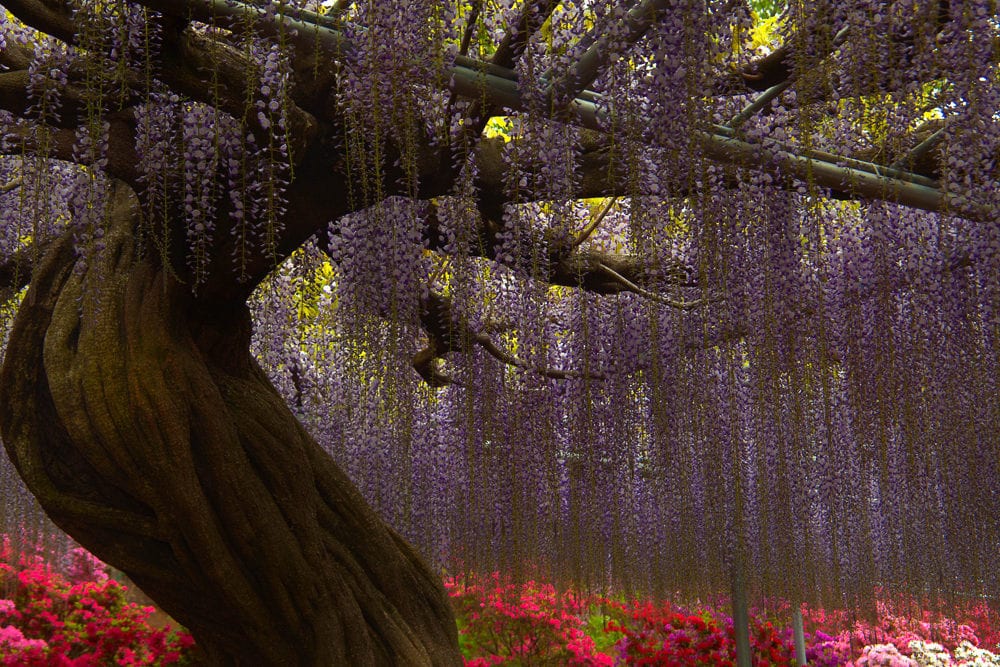 Where else in the world can you visit the most beautiful gardens in the world and a tunnel of Wisteria?? Japan’s Wisteria gardens are truly unique and heavenly. Read The Ultimate Guide to the Whimsical Wisteria Tunnels of Japan 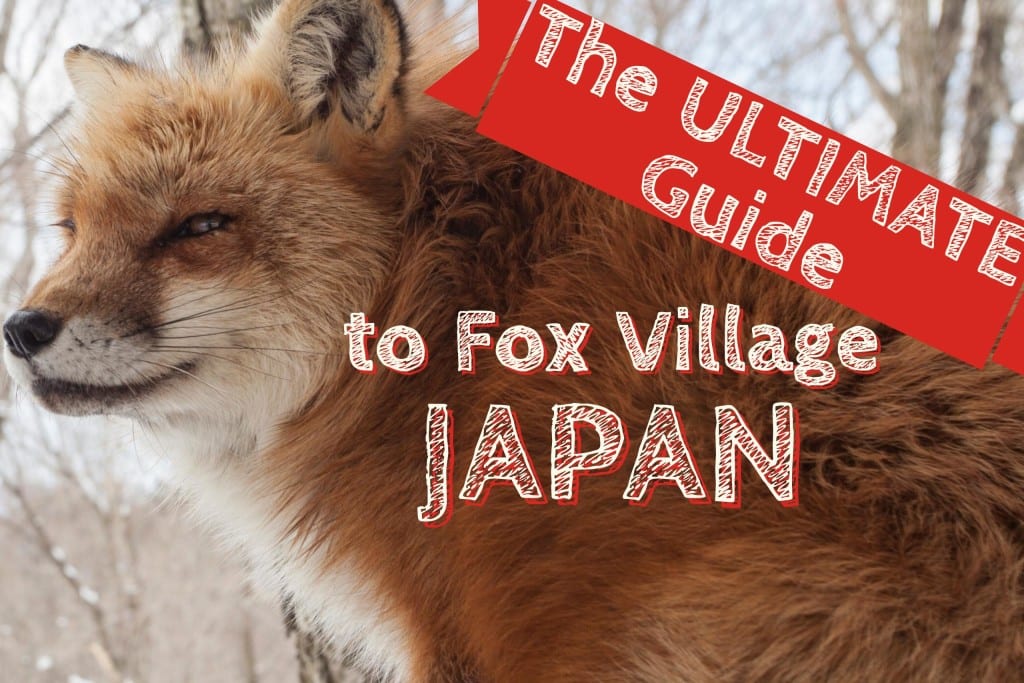 From bunny island to deer in Nara, to fox village, Japan loves its animals. There’s an entire island devoted to bunnies and an entire park devoted to adorable foxes. Read The Ultimate Guide to Zao Fox Village Japan to plan an afternoon of furry fun.

プリクラbooths are one of the most brilliant things to do in Japan. These are photo booths that often young girls get super excited about with their friends, BUT it’s just as fun to go with your foreign friends. It’s even better if there’s a guy in the group because their faces turn so pretty. These photos booths enlarge your eyes and transform everyone into anime alter egos. 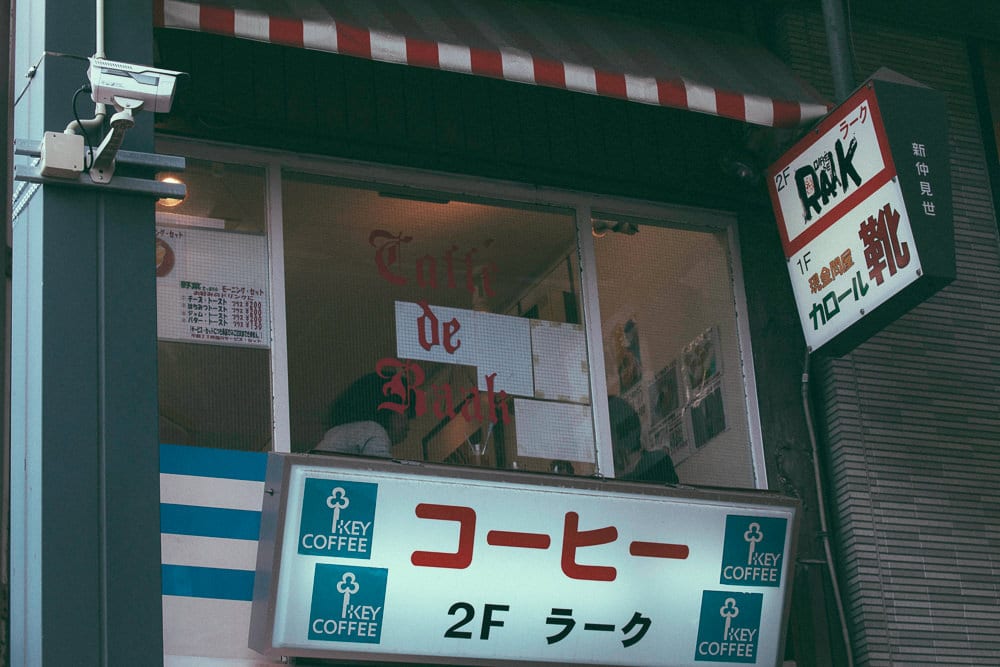 The craft coffee culture in Japan is so profound. Kissaten coffee houses are often family-owned. Here, you can eat off antique porcelain tea sets and sip craft coffee with a slice of homemade cheesecake.

These places make the best hot chocolate in the world too btw. Kissatens are often popular among the older crowd but I personally love them. Many have not changed in decades.

In my book Hidden Tokyo, I provide a detailed list of the best kissaten cafes to visit around Tokyo, as well as their modern-day equivalents with latte art. Kissaten cafes are purely only in Japan things to do.

Most people who aren’t familiar with Japanese culture have no clue about this one. It’s customary to eat KFC on Christmas Eve in Japan! They dress up Colonel Sanders and line up for a mile to bring home the most expensive KFC on this planet. But how cool of a tradition is this??

居酒屋 restaurants are super popular among both Japanese locals. Most of these places are popular with salarymen because you go there to eat small portions of greasy food and drink a lot of beer and sake. I’ve only been to a handful of izakaya restaurants I thought had good food, but you go for the drinks and the atmosphere

17. Tokyo in the Rain | Only in Tokyo Things to Do 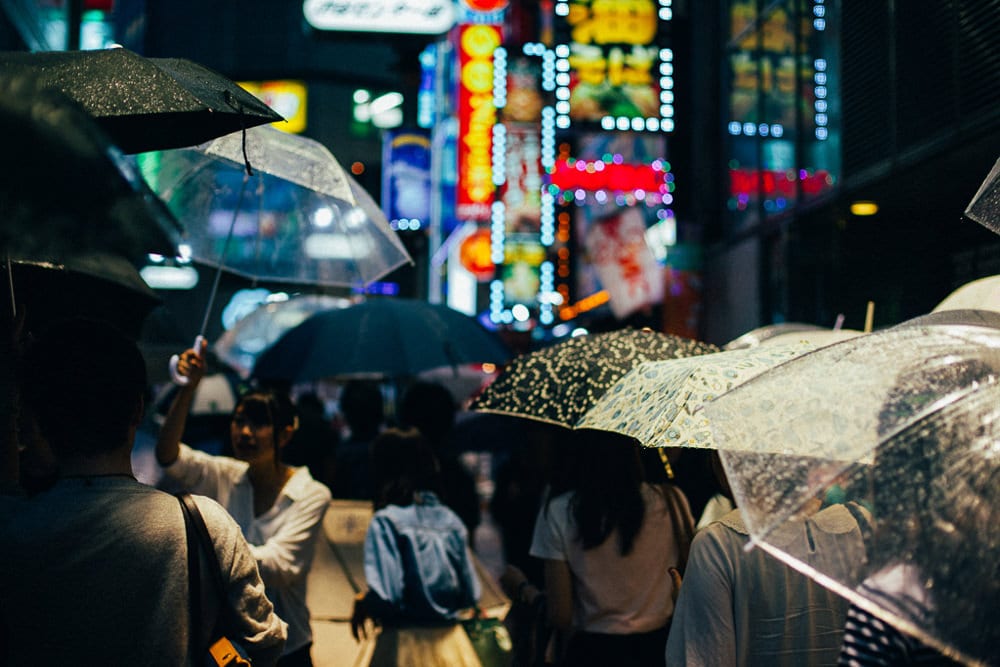 There’s nothing like the sight of Tokyo in the rain. The city’s lights really come to life as everyone carries colorful and clear umbrellas. My favorite spot to watch Tokyo when it rains is Shibuya crossing. It’s a sight you’ll never forget.

Also, check out Things to Do in Tokyo at Night and 48 Hours in Tokyo.

How to Spend 48 Hours in Tokyo