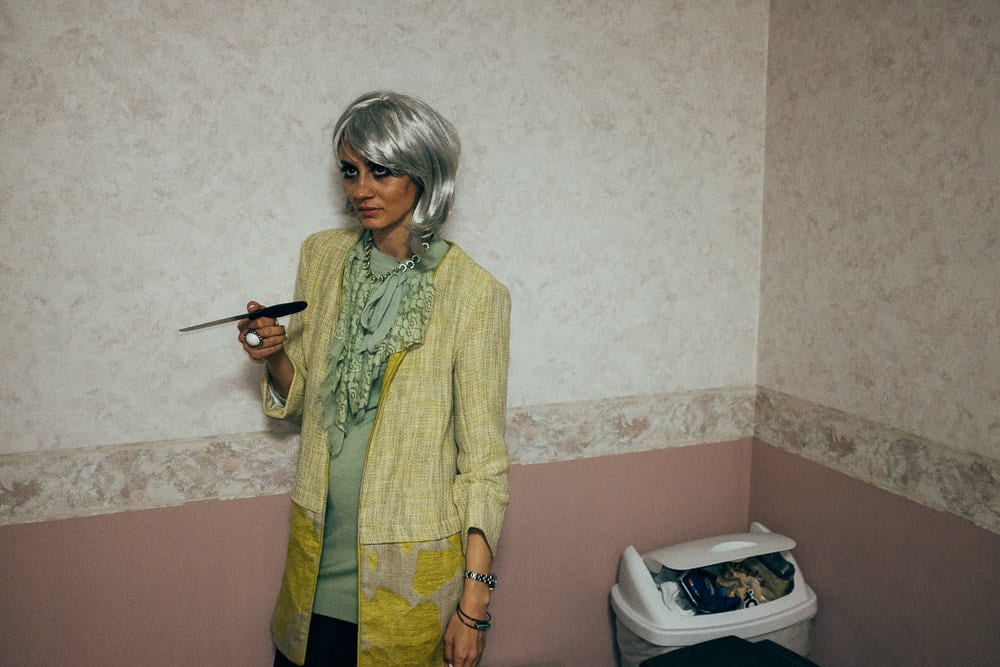 The Red Kochia in Japan: Autumn in Ibaraki 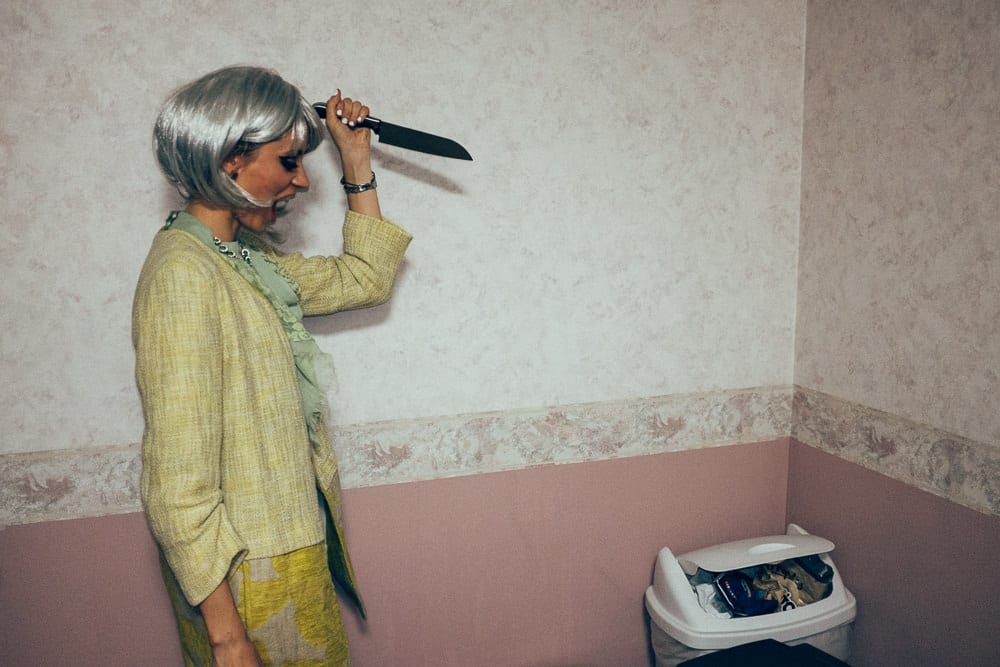 Halloween in Japan this year wasn’t so bad and it was a heck of a lot better than our first year living here. Last year I was in South East Asia for a month backpacking during Halloween so I missed it. Sad face. Ok, not really. But the year before that was a total bust. We wrongly assumed that just because Tokyo is obsessed with cosplay that the entire city goes nuts on Halloween.

Blatantly wrong assumption! Although you’ll see plenty of amazing costumes wandering the streets prior to Halloween, it’s limited to certain spots around the city. We got dressed up, I painted my face like a zombie, put on a short little dress and then we headed to Shibuya in search of some entertainment or parties to crash. But something unexpected happened.

No one else on the train was in costume. And when we hopped off at Shibuya station, we didn’t see a single other person dressed up. It felt like being tricked into wearing a costume to school in the 5th grade, only to find out you were the victim of a sad practical joke.

Granted, Halloween that year was on a weeknight. But it felt lame being the only zombie on the street. But from that, we learned two important lessons about how to do Halloween in Tokyo.

First, Halloween in Tokyo is often celebrated the weekend before, not actually on Halloween. Especially if the holiday falls on a weekday. This doesn’t include Tokyo Disney though! You can celebrate Halloween for about a month and you are sure to find like-minded costume-donning individuals out that way if you decide to go.

But second, what seems to be the most common sight on Halloween in Tokyo and Yokohama is the few amount of foreigners heading to parties in costumes. And from my observation that first year and from last night at Yokohama station, it’s a glaring juxtaposition. Generally, train cabins are filled with salarymen likely heading home after the typical round of drinks after work.

But then you’ll see one or two people dressed up which makes for an interesting contrast against the monotony of black and white attire and stoic expressions staring at their phones. That said, crazy parties do exist in the city but if Halloween isn’t on a weekend, it may be harder to find.

Of course, the larger night clubs in Roppongi or Shibuya will have something going on if that’s your scene and you can normally see a lot of people dressed up around Harajuku and Roppongi. But it’s nice to look up these places ahead of time and the best bet is looking at Metropolis Magazine. These guys are an awesome resource for any occasion.

But this year I bought my costume a week earlier and decided to go as a bloody doctor. I wasn’t really feeling the whole dressing up thing this year. But I also bought a platinum blonde / grey 60s bob wig because it just looked fun, and who doesn’t enjoy a good creative wig opp? Only later did I joke about the possibility of being an Ebola doctor, though my husband said that may not be a good idea. Eh, he was probably right. I erred on the PC side.

But last night while getting dressed up for Halloween, I thought it’d be fun to pay homage to Twiggy, particularly her classic eye makeup. I mean, one can still pull off Twiggy makeup with a bloody MD costume right? Why not. Turns out, I kinda liked my Twiggy look a bit too much so I improvised and grabbed the most mod, aka tweed coat and pea sh*t green color items I owned to drape myself with.

I’m kinda in love with Bridget Bardot’s look too and my sweet husband played it well when I opened up my laptop and showed him a picture of her and asked with sincerity, “Do you see a resemblance?”  Trained to answer these kinds of potential road bombs throughout eight years of marriage, he looked at me and said: “yea, I can see it.”  Bless his heart (narrated with my best Southern accent). So I scrapped the Ebola doctor costume and decided last minute to be a 60s fashion icon.

I paired my look with mod white nail polish, a large vintage ring, vintage Chanel earrings, and my Chanel high boots. Not going to lie, I was pretty impressed with how the entire thing turned out. I looked like I stepped out of an entirely different decade. I guess I looked a bit overly Chanel, but not a bad thing IMHO. I guess you just have to dress your mood, even on Halloween.

We ended up going to a friend’s house which turned out to be a total classic Japanese home with pastel wall colors, etc. It kinda looked like my Nana’s house back in the 1960s minus all the Jesus statues and the eight-foot long embroidered textile of the Last Supper draped above the dining room table.

But that’s for another story, and believe me, it’s quite a story. But being a Hitchcock fan, I grabbed the kitchen knife for a few scenes to shoot. Not going to lie, some of these photos are downright creepy. But I kinda love them. So there you have it:  60s fashion icon / Norman Bates’ mother. And btw, Daniel went as Peter Pan or Robin Hood. We couldn’t quite figure that out. 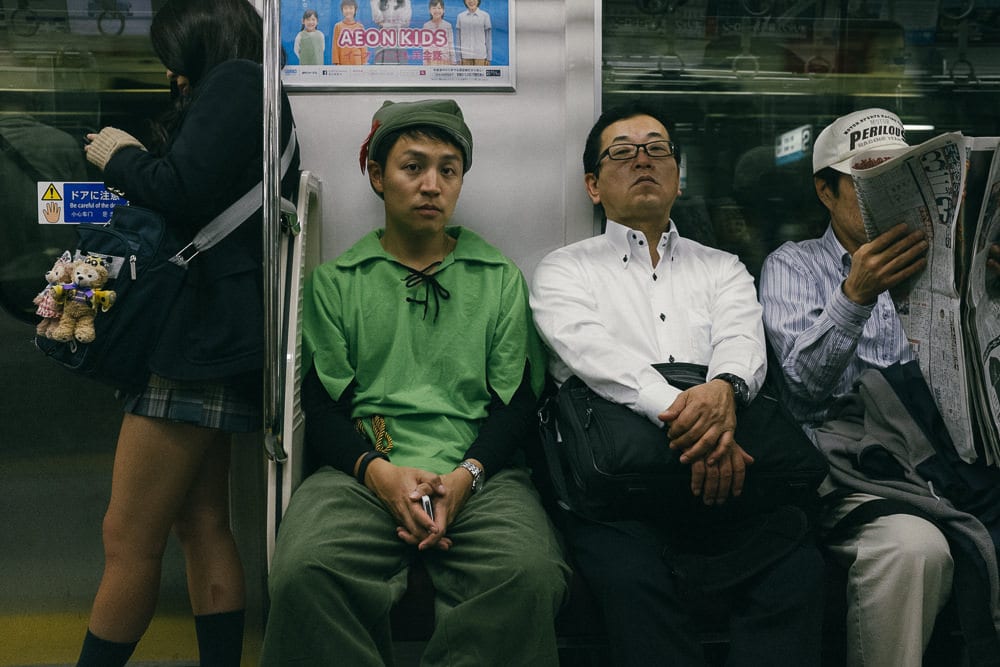 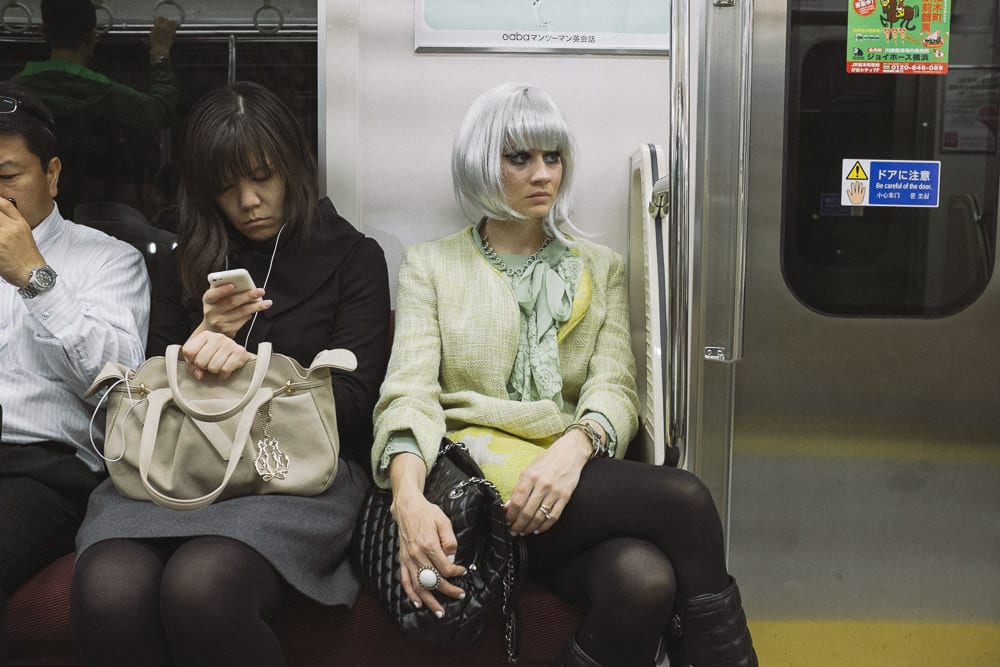 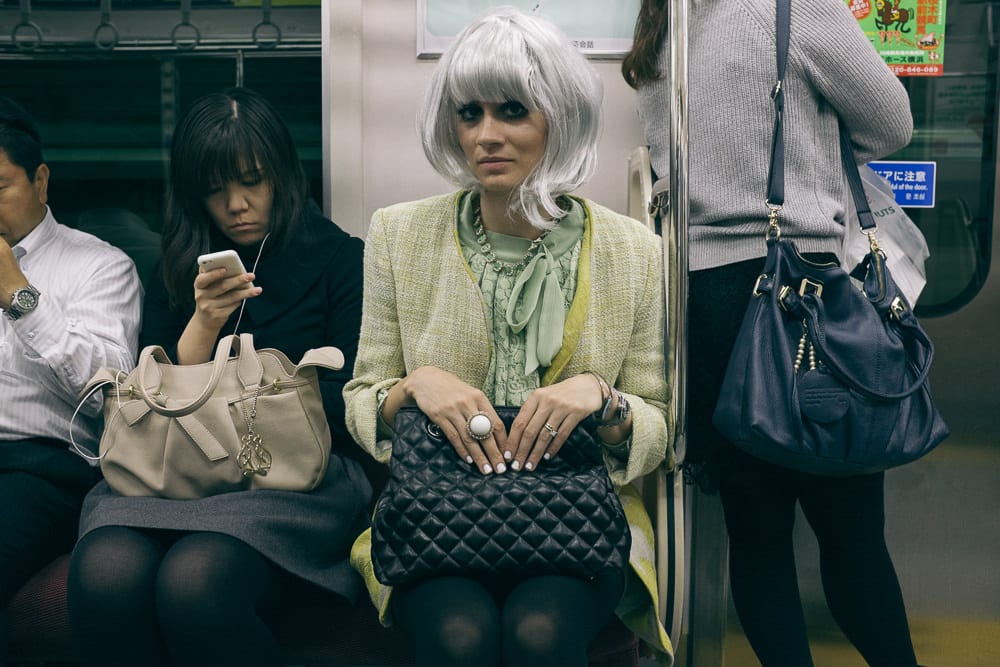 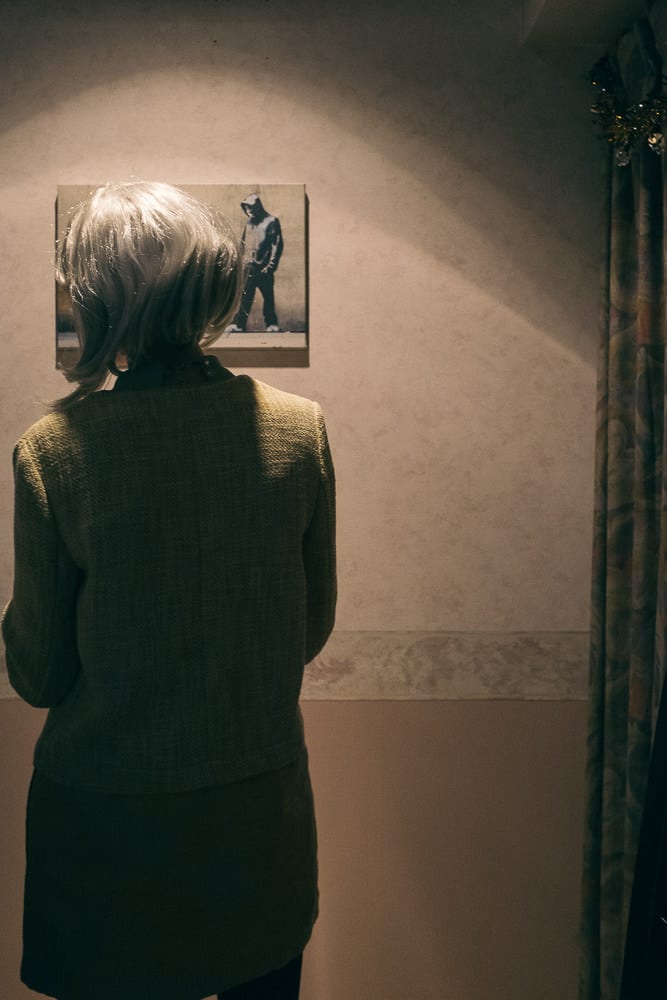 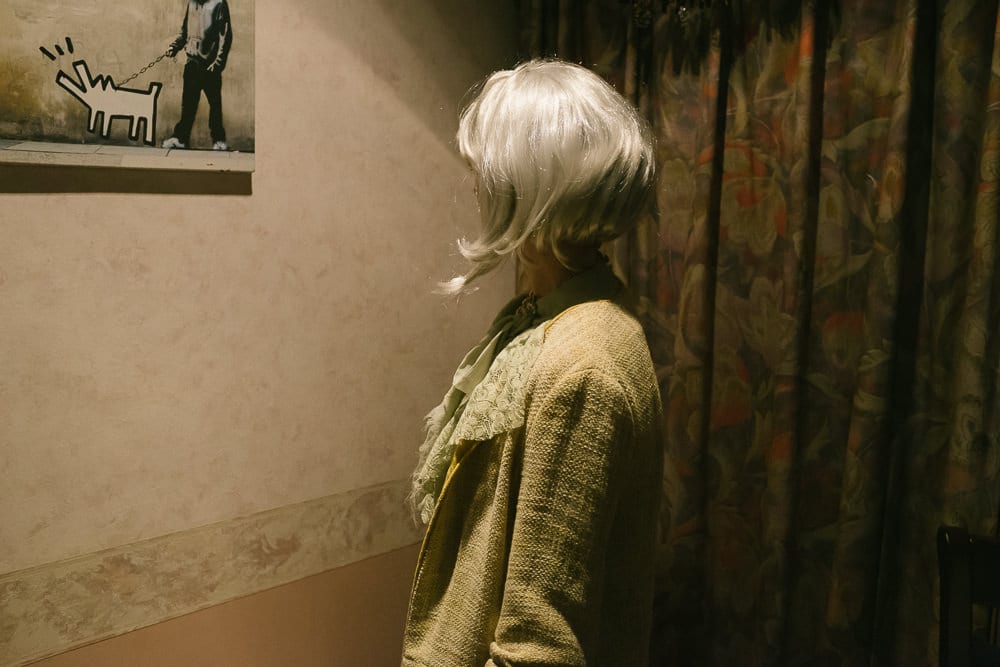 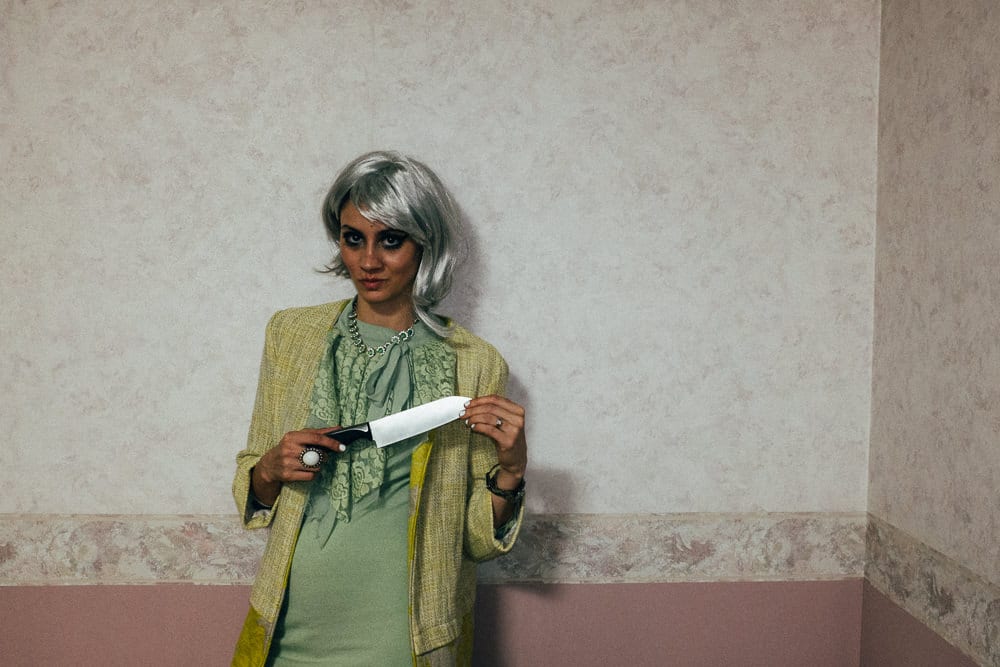 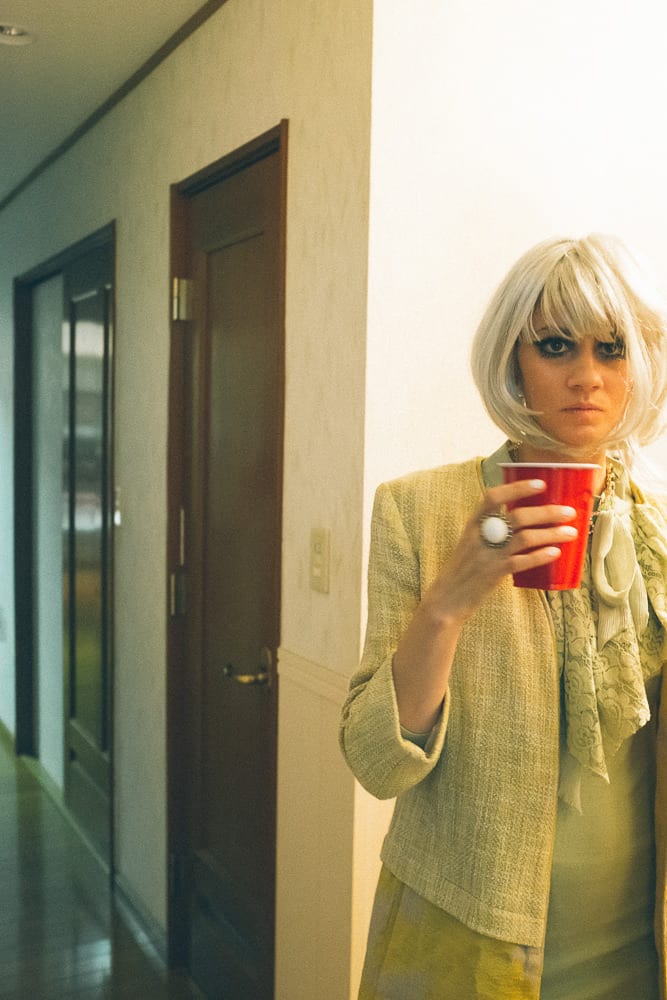 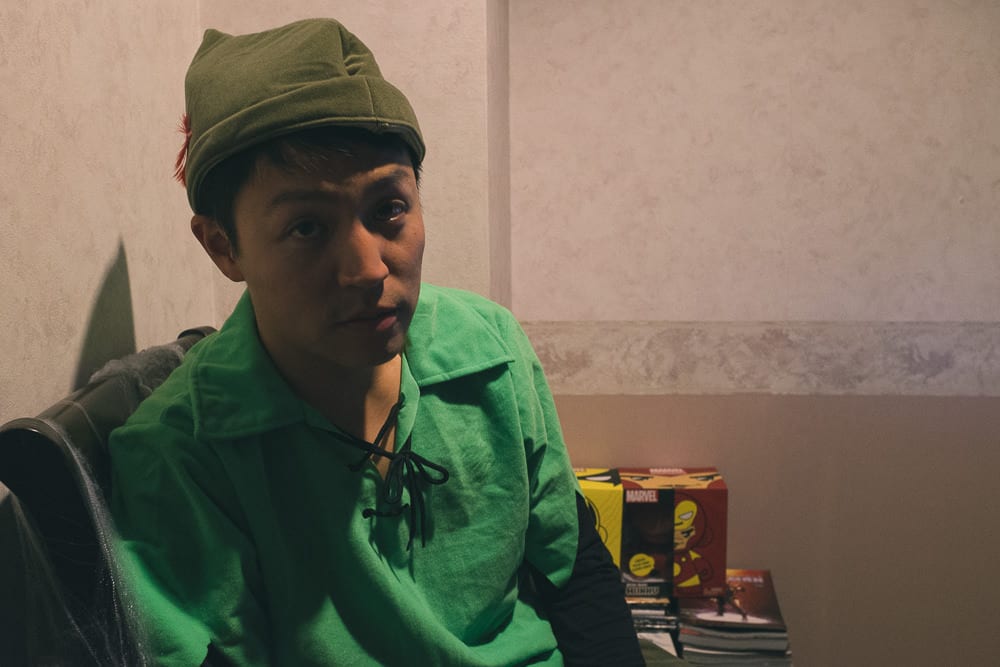 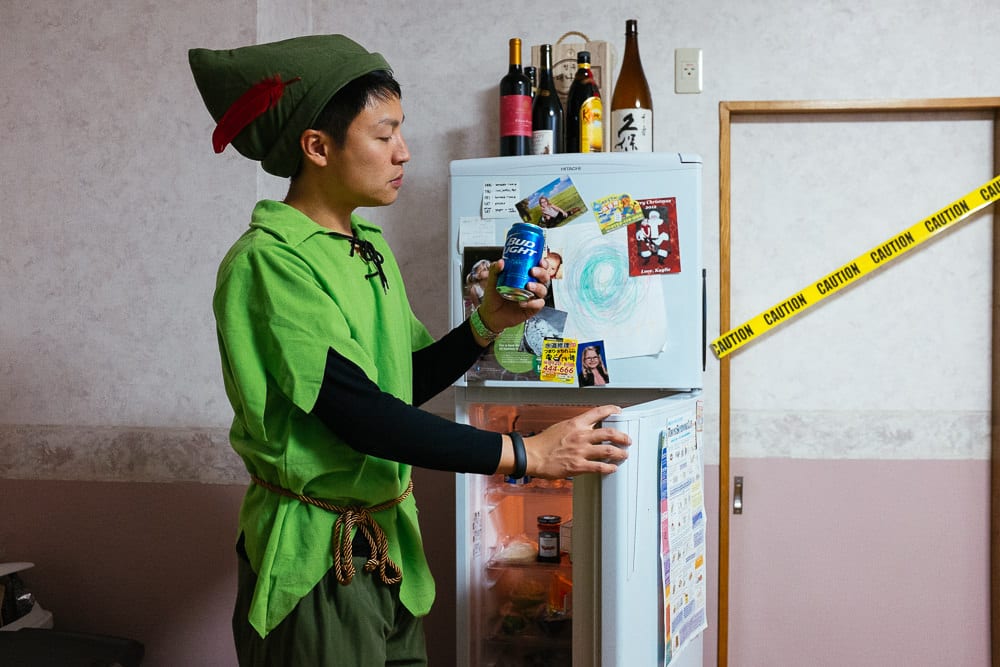 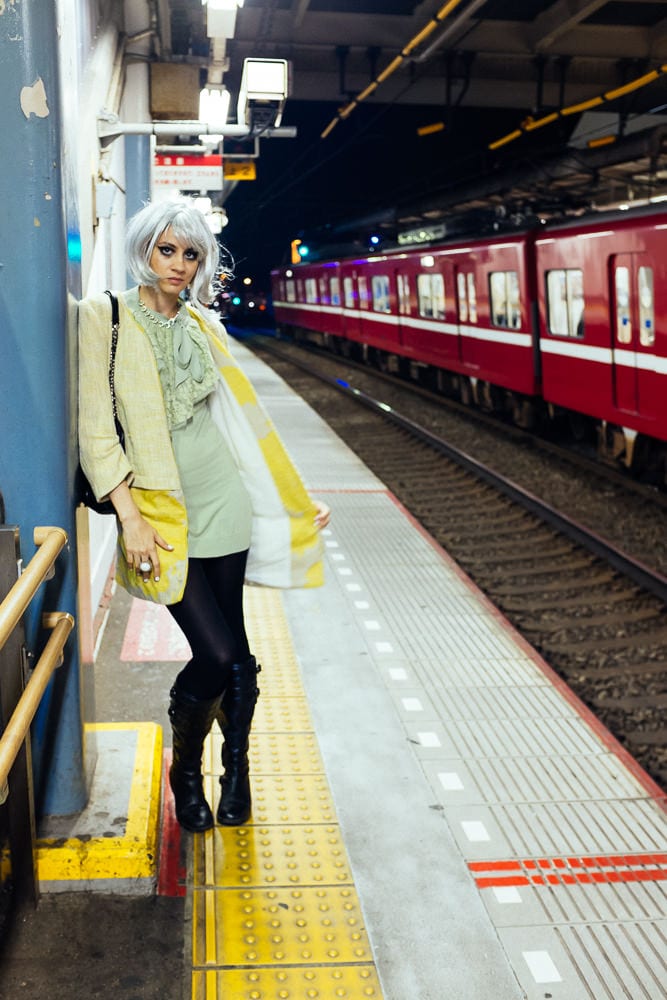 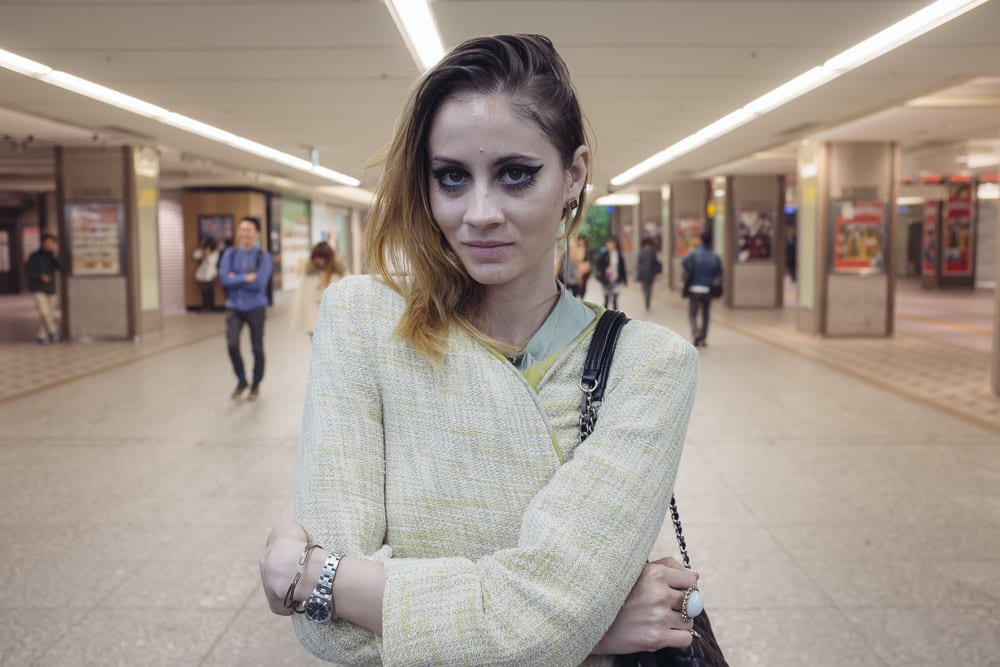 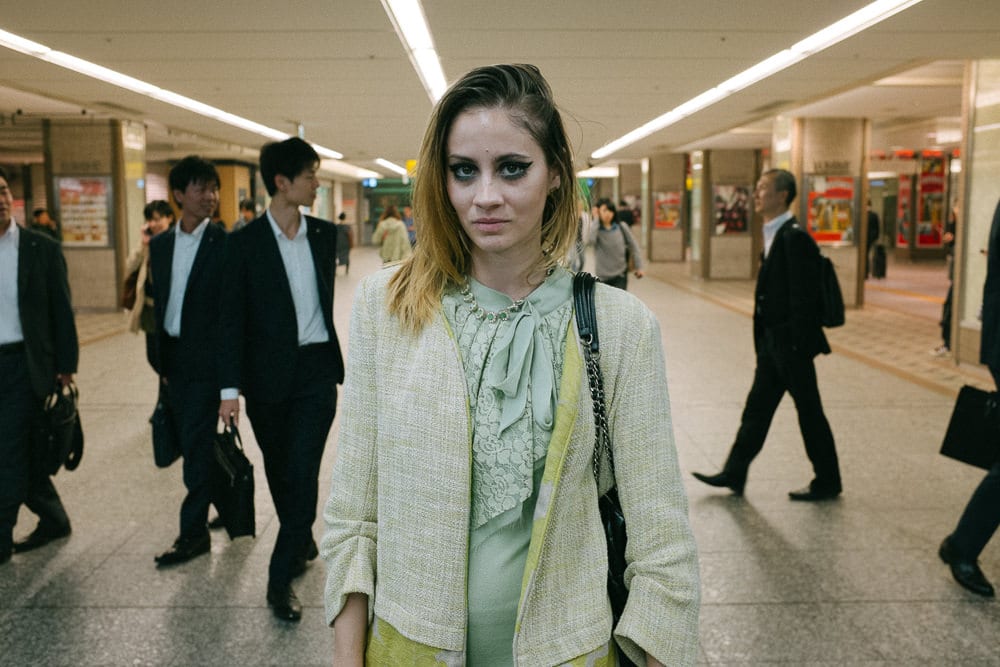 I love this last shot of me at the end of the night at Yokohama Station with the flow of salarymen. My husband knows how to take a good photo, that’s for sure.