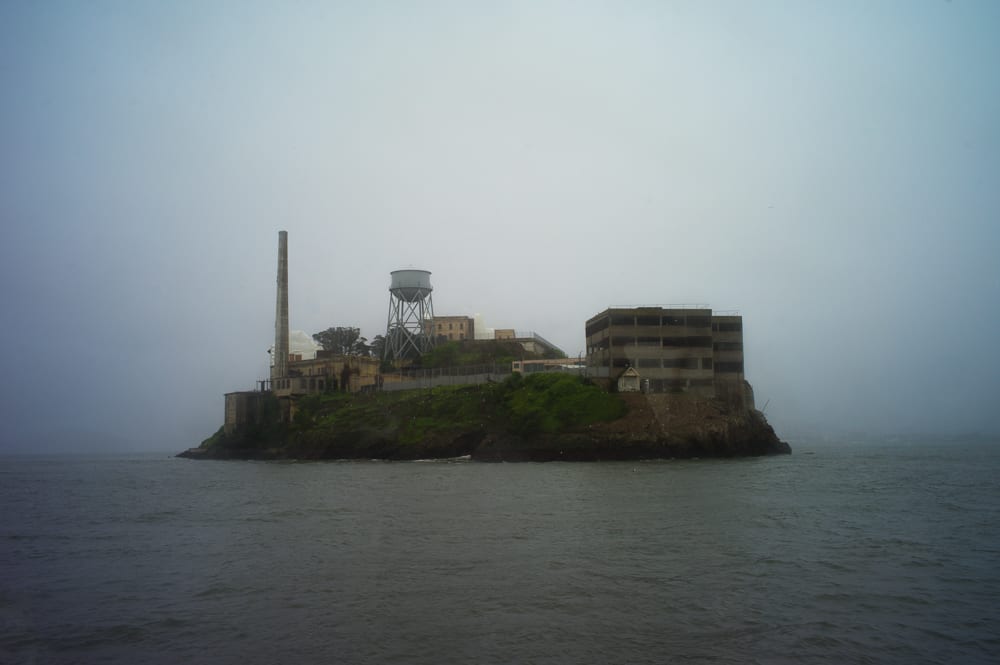 Alcatraz at night was seriously one of the best tours I’ve ever been on, hands down. I’ve found myself in San Francisco a few times, but I never made it to Alcatraz. For some reason, I wrote it off as “too touristy” for me. This turned out to be a totally wrong assumption.

And then we planned a totally last minute trip to the West Coast and upon doing a small amount of research, I learned that Alcatraz offers tours at NIGHT.

As a self-proclaimed ghost story and paranormal nerd, the idea of touring Alcatraz, this abandoned prison on an island, alone, at night was just too exciting to pass up. In an odd way, I even found myself more excited about this upcoming tour to Alcatraz than actually going to watch the Northern Lights last January. Giddy excited.

It was rainy that day which added to the grim mood of the tour as our boat toured around the island and docked. I looked up and had a flashback to the movie Shutter Island. The sky was grey with rain and my eyes fixated upon the words written in graffiti, Indians Welcome, on the facade of the water tower. 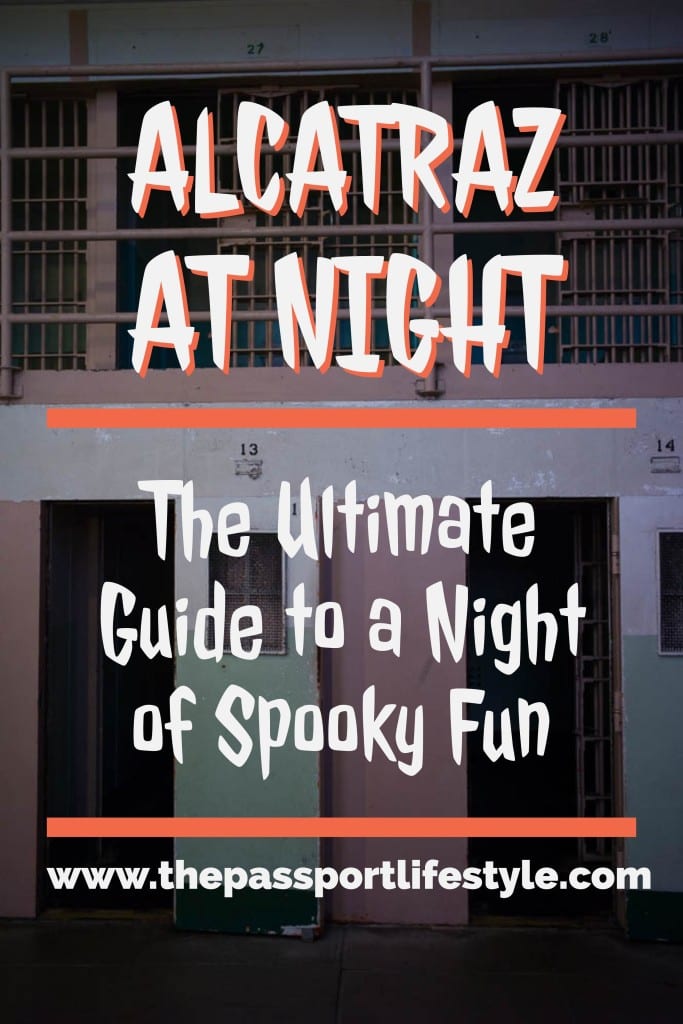 I felt a chill as I gazed upon this abandoned prison that has both stopped time on the inside for many souls, yet also remains a bulwark against modernity and progress on the outside.

The fascinating part about Alcatraz is its taunting nature. It’s not isolated in some remote part of the world like Siberia with no other life. Prisoners here were forced to confront on a daily basis, the fact that life, as they knew it outside of prison, would never be the same.

Stories are told about prisoners who could so easily hear the celebration and chatter of New Year’s Eve celebrations happening a mere mile away.

You can’t miss the remains of the 19-month political occupation by the Native Americans in 1969, an etched history onto the prison.

Ironically when we docked the island, I expected it to feel desolate of life, but it felt oddly tropical with the seagulls and colorful flowers draped in mist.

Our boarding group was rather large so we worried about having any privacy on the tour. When we docked, everyone walked at their own pace up to the prison. We were marched through the prisoner’s original check-in where we were given headphones with plenty of self-guided tour information, instead of jumper suits and prisoner numbers.

The crowd dispersed and for the remainder of the next two hours, we explored the prison, and in many parts, alone. No, it wasn’t too good to be true; we got to explore Alcatraz Prison, at night, and completely independent. It was awesome.

Another perk of taking an Alcatraz tour at night is that a couple of different time slots exist at night. We went on the earlier tour, but you can technically stay several more hours if you wish, so long as you don’t miss the last ferry home.

One last but super AWESOME perk of taking the night tour is that you get to explore the hospital wing which apparently isn’t open during the day. After spending over an hour exploring the prison, walking upstairs to the hospital, everything changed and felt colder and much creepier.

I wasn’t really spooked out exploring the prison and even stepping into the solitary confinement cells. But this was like a real-life horror house filled with hospital gurneys, chipping wall paint, and an eerie coldness. I stood alone in this dark room trying to shoot some pictures, but I’ve watched way too many paranormal TV shows because all I could think about was some presence standing behind me, watching me. I felt a simultaneous rush of excitement and fear.

My husband wouldn’t walk into this room. He didn’t walk into any room alone, and he didn’t step foot in any of the solitary confinement cells. I did though. I live for this kind of stuff, hehe.

I recommend planning enough time at the end of your tour to check out the hospital floor before it closes. There were times when I was roaming around rooms in the hospital, at night, in the dark, all alone. Not going to lie, I wish I brought my EMF detector. 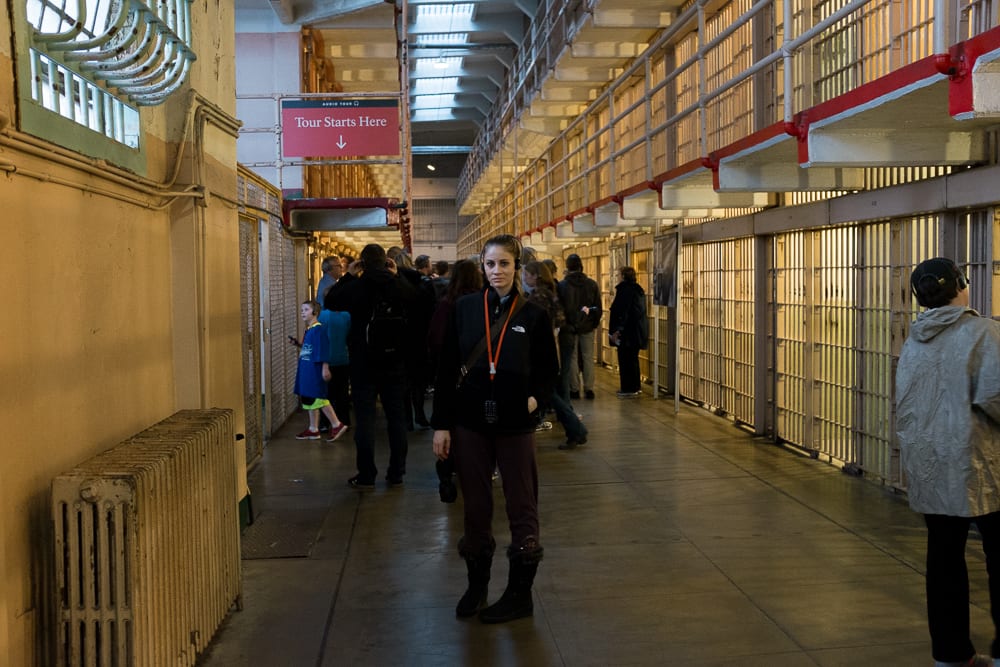 How To Make a Reservation for Alcatraz Cruise at Night

Tickets to Alcatraz can be purchased here from Alcatraz Cruises, and I, fortunately, snagged a couple of spots since we went on a weekday. Alcatraz Cruises is the official ticket holder for the U.S. Park Service which oversees the island.

IMPORTANT TIP:  The Alcatraz Night Tour is hugely popular and often books up far in advance. If you want to tour Alcatraz at night, it’s best that you make an advanced reservation as soon as you can.

BEWARE: There are OTHER tour agencies that sell tickets, BUT they buy them from Alcatraz Cruises and then resell them back at higher prices. So make sure to purchase your ticket from this designated vender.

There are other Alcatraz tours for sale. Another option if this booked up or if you simply want to explore Alcatraz independently without crowds is through Viator, who also offers a Viator VIP: Early Access to Alcatraz Tour. This tour is also unique in that you can beat the crowds and explore independently.

What made the night tour extraordinary was the freedom you had to explore, so going in the morning and having the ability to explore independently is a good alternative to the Alcatraz at night tour. One of these is probably the best Alcatraz tour you can find.

Your tour also comes with an Alcatraz Cruise. We sailed around the island which gives you a nice panoramic view of the island. You board on Pier 33 at the Embarcadero. I was quite impressed with this tour. The operators were funny and super nice. The tour itself was incredibly organized.

You can pick up your tickets at will call or print them out, but be sure to bring a photo ID to confirm your identity. 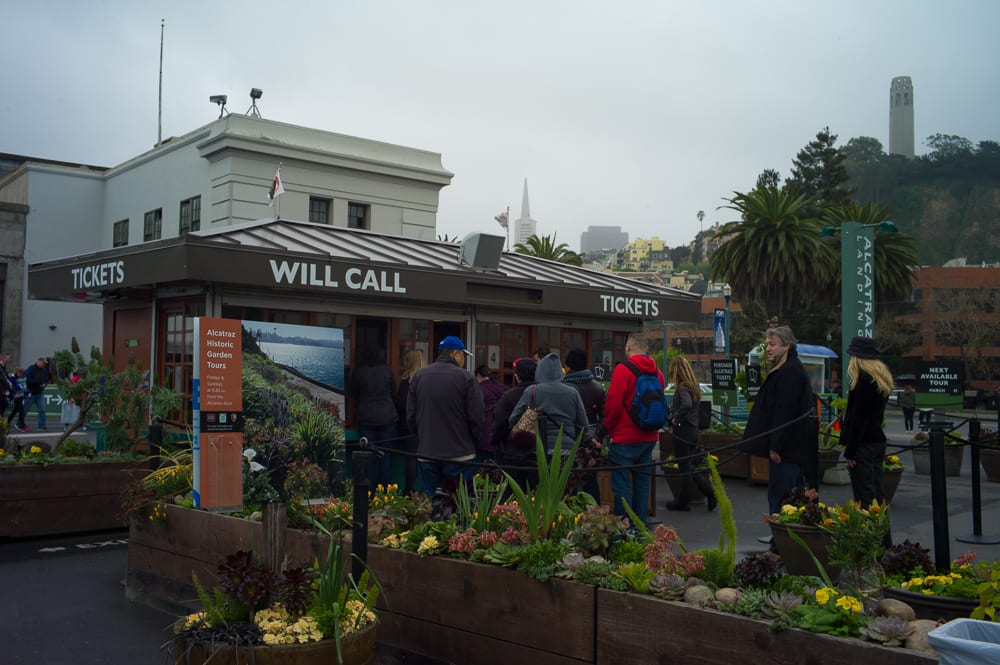 Check the official website for current prices but they run approximately $40 per adult. What do you do if Alcatraz Tickets are sold out? Click Here to figure out how to see the island in other ways.

There are some sparse restrooms on the island.   There’s a gift shop too Be sure to bring a jacket, it can get cold We waited in line early for about 30 minutes. The line gets really long! So if you want a seat on the ferry, it’s best to get in line first. But if you don’t care about getting a seat, then don’t fret about being the first in line. They serve modest food and beverages on the ferry ride there and alcoholic beverages are only sold on the returning trip. There’s not really food on the island, so make sure to bring your own if you get hungry or need it. Wear comfortable shoes. Bring extra batteries for your camera if you believe in ghosts. I saw people with tripods although I didn’t bring mine. I would next time though.

Alcatraz at night is seriously one of the coolest tours I’ve been on. It blew me away and I had so much fun. I totally recommend it.

Free to Explore Alcatraz at Night

You Can Visit the Hospital

DMZ Tour: How to Travel to the Border of North Korea & Inside the JSA